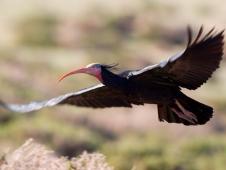 In 2002, a tiny population of the migratory Northern Bald Ibis was rediscovered breeding in south-east Syria, where it was assumed to have been extinct for more than 70 years. To discover where the birds migrated to for the non-breeding season, BirdLife partners in the Middle East, Africa and the UK used satellite-tracking to follow the birds movements away from the breeding colony via Yemen all the way to Ethiopia. These results are critical to developing conservation measures for this species. 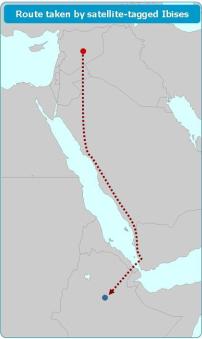 Until recently, Northern Bald Ibis Geronticus eremita was believed to survive in the wild at only a handful of sites in and around the Souss-Massa National Park in south-west Morocco, with an additional semi-wild population in Turkey. However, in 2002, a small colony of just seven individuals was discovered in the Syrian desert at Palmyra (Anon. 2002, Serra 2003). Being migratory, this Middle Eastern population is behaviourally distinct from the Moroccan one, with which it is thought to have separated long ago.

The newly discovered population became an immediate conservation priority. The Syrian government established a protection programme and declared the breeding site as a protected area. The nests were watched over by Bedouin nomads and rangers from the Syrian Ministry of Agriculture, and the birds appeared to be breeding well. However, with few young birds returning to the breeding site each year, conservationists feared that the ibises were falling victim to hunting and pesticide poisoning on their wintering grounds and along their migration route. Effective conservation of this tiny population was therefore dependent on understanding the birds' movements away from their Syrian breeding grounds.

In 2006, with the Palmyra colony consisting of thirteen birds (two breeding pairs, six juveniles and three sub-adults), scientists from the BirdLife Middle East Secretariat and the Royal Society for the Protection of Birds (BirdLife in the UK) set out to locate the ibises’ wintering grounds and uncover why so few sub-adults were returning. In June, three adults were successfully trapped and fitted with satellite transmitters (Anon. 2006). It was discovered that the birds undertook a 3,800 mile round-trip, across seven countries, and spent the winter in the Ethiopian highlands. The birds passed via ‘staging grounds’ in Yemen, while the return route took them north to Sudan, then across the Red Sea at its widest point to Saudi Arabia. Researchers from the Ethiopian Wildlife and Natural History Society (BirdLife in Ethiopia) quickly located the three tagged ibises at the wintering ground, along with the fourth adult bird. Surprisingly, there was no sign of the nine younger ibises. The ibises’ wintering range was found to be very different to their Syrian breeding site: agricultural fields and pastureland instead of rocky open desert. Whereas at the breeding colony the ibises were wary of humans, within the agricultural landscape of the Ethiopian highlands the birds lived in close proximity to people, even roosting in the middle of a village.

The knowledge gained from the satellite tracking project will be critical to the conservation of the species. Working with colleagues in Ethiopia, Yemen and elsewhere along the adult birds’ migration route, BirdLife can take action to protect the species from hunting and the use of harmful pesticides. However, the mystery of where the sub-adults spend their winters still remains and an important next step will be to satellite track young ibises in order to understand their migration behaviour.

Recommended Citation:
BirdLife International (2008) The wintering grounds of Northern Bald Ibis in Syria have been discovered using satellite tracking. Downloaded from http://www.birdlife.org on 03/12/2022