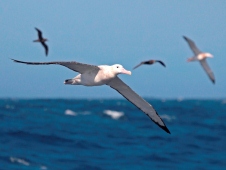 The Tasman Sea, in international waters between Australia and New Zealand, is a key feeding area for many globally threatened seabirds. Unfortunately, the ingestion of plastic debris is estimated to be higher at this site than any other worldwide. The threat from fisheries bycatch is also high. Actions needed include bycatch mitigation measures and solutions to the plastic ingestion problem.

Analysis of data collected from satellite tracking devices has shown that the Tasman Sea IBA is a key feeding are for a number of threatened seabird species, which occur in greater than IBA threshold numbers. The site is used year round by breeding Antipodean Albatross Diomedea antipodensis (VU), Providence Petrel Pterodroma solandri (VU) and White-winged Petrel Pterodroma leucoptera (VU) as well as by juvenile Wandering Albatross Diomedea exulans (VU) which travel many thousands of kilometres to feed here. The site is also used seasonally by Buller’s Albatross Thalassarche bulleri (NT - Dec-Jan) and Cook’s Petrel Pterodroma cookii (VU - Mar-May).

Accidental bycatch of seabirds by fisheries is the biggest at-sea threat for many species, and has been the main driver of albatross declines.  The Western Central Pacific Fisheries Commission manages and monitors fisheries activities in the region and has found seabird bycatch to be at its highest in the Tasman Sea with Wandering, Black-browed, Buller's and Shy Thalassarche cauta albatrosses being the most affected between April and Septermber. Bycatch is not restricted to seabirds, and drift nets in the Tasman Sea have been shown to have inadvertently caught and killed 4,600 dolphins in a single season. Trawl fisheries in the area have also impacted many deep sea coral species.

Recent research (Wilcox et al., in prep) has shown that the threat of plastics to seabirds in the form of ingestion is at its greatest globally in the Tasman Sea. Monitoring of Flesh-footed Shearwater Ardenna carneipes breeding on Lord Howe Island, but which feed in the Tasman Sea, have shown that 95 per cent of nesting birds have some plastic in their stomachs.

Recommended Citation:
BirdLife International (2014) The wildlife of the Tasman Sea is facing a range of threats. Downloaded from http://www.birdlife.org on 29/06/2022