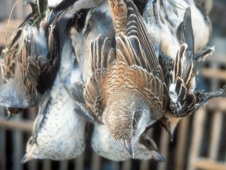 Birds are used extensively by people: over 40% of living species are used, primarily for pets (37%) and food (14%), but also for sport hunting, wearing apparel or ornamentation and traditional medicine. Red List Indices show that the overall status of these utilised species is deteriorating, with the number of species improving in status substantially outweighed by the number declining. Various factors drive these declines, including unsustainable use, but non-use factors combined were more important overall.

Red List Index (RLI) for utilised species, showing trends driven by use (or its control and management) compared to trends driven by other factors combined (e.g. habitat loss), for the proportion of species expected to remain extant in the near future without additional conservation action; n=4,481 non-Data Deficient species. Dashed line also includes cases where hunting for food contributed to trends but was not the primary driver of the change in status. Butchart (2008).

Red List Indices for utilised species shows that they have deteriorated in status during 1988–2004 (Butchart 2008). Although some species have been downlisted to lower categories of threat owing to successful reduction in over-exploitation and other types of conservation action, many more have been uplisted to higher categories of threat owing to increasing threats, including overexploitation, driving faster population declines and leading to smaller population and range sizes. The Red List Index shows that the net effect of these up- and down-listings has been an overall reduction in the proportion of species expected to remain extant in the absence of additional conservation action, i.e. that this set of species is slipping further towards extinction.

Various factors drive these trends in the status of utilised species. Red List Indices (see figure) show that trends driven by use were outweighed by non-use factors combined. The pet trade and hunting for food drove similar rates of decline, but were outweighed by trends driven by other factors combined even when incorporating trends for which the use was a contributory factor as opposed to a primary driver.