The perverse economics of habitat conversion 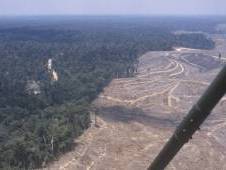 Deforestation in Sumatra: what is the value of intact forest versus cleared land? © Marco Lambertini/BirdLife

Total economic value of relatively intact natural habitat compared to an alternative land use, for five case-studies across four biomes 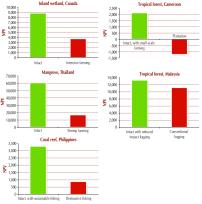 There have been few studies of the economics of converting relatively intact habitats to human uses such as crop cultivation, aquaculture or plantation forestry. Even fewer have attempted to take into account the multiple and interdependent nature of the goods and services provided by ecosystems. A recent literature survey found only five such case-studies, covering only four biomes (Turner et al. 2002, Balmford et al. 2002; see figure).

In four out of the five case-studies, habitat conversion made economic sense to the convertors, in terms of the short-term private benefits accruing to them—especially when subsidies were taken into account (Balmford et al. 2002). However, even when some of the private benefits are accrued by the local population (which is often not the case), they frequently fail to filter down to subsistence users (the poorest segment of society), thereby increasing poverty and inequality (Turner et al. 2002).

In all five cases, however, once the wider, unmarketed costs to society had been accounted for, in terms of the loss of ecosystem services, the public costs of habitat conversion were found to outweigh the private benefits by c.50% on average (see figure; Balmford et al. 2002). Habitat conversion does not make sense from the perspective of global sustainability. Indeed, the economic benefits of conserving the world’s remaining natural habitat appear to exceed the costs by at least 100 to 12.

Such case-studies highlight some of the reasons why drastic conversion and degradation of the Earth’s remaining natural habitats have continued largely unabated since the Earth Summit in 1992, and why many countries are not on track to meet the United Nations’ goals for human development and poverty eradication by 2015 (Balmford et al. 2002, UNDP 2001).