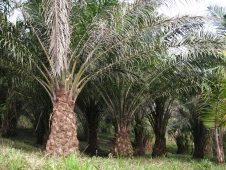 The global production of many tropical commodity crops, including soya bean, oil palm, coffee, cocoa and rice, has increased dramatically. Such land-use changes, linked to global trade rules and over-consumption in the developed world, lead to drastic losses in biodiversity and ecological services in the developing world.

There have been significant increases in the areas under cultivation for many tropical commodity crops (Donald 2004). Soya bean and oil palm have experienced the biggest growth, although the actual area under cultivation for these combined is still lower than that for rice alone. Soya bean and palm oil have become major commodities for consumption by the developed world, the latter being used in a great range of products from ice-cream to beauty treatments. Coffee and cocoa are major sources of income for developing countries, second only to oil in legal international trade (Donald 2004). Such land-use changes lead to drastic losses in biodiversity and ecological services from wild nature (Balmford and Long 1994; Costanza et al. 1997). For example, Brazil alone has over 20,000 km2 of coffee plantation, most of it having replaced primary rainforest. In Indonesia, coffee planting is responsible for massive forest loss, even inside protected areas (O’Brien and Kinnaird 2003). These land-use changes are linked to global trade rules and over-consumption in the developed world, which are thus partly responsible for large-scale habitat loss in high-biodiversity countries.

Recommended Citation:
BirdLife International (2004) The past 40 years have seen dramatic increases in global production of tropical export commodities. Downloaded from http://www.birdlife.org on 05/02/2023