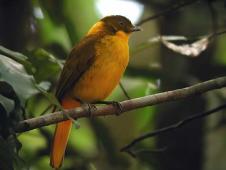 Under global climate change, the montane tropical rainforests of north-eastern Australia are expected to shrink considerably, reducing the potential ranges of the 13 endemic bird species they support. An increase of just 1°C will reduce their mean range by over 30%, and the number of extinctions will increase dramatically if temperatures rise by more than 2°C; almost all species will go extinct if temperatures rise by 5.8°C.

The montane tropical rainforests of north-eastern Australia support 13 endemic bird species. Under global climate change, these forests are expected to shrink considerably. An increase of just 1°C (considered inevitable within the next few decades) will reduce the mean range of endemic birds by over 30%, as suitable climate space retreats to higher altitudes up mountain sides. The reduction may be as much as 96% if temperatures rise 3.5°C. Assuming that the complete loss of a species’s suitable range results in its extinction (because there will be no areas of new suitable habitat to disperse to), the number of extinctions will increase dramatically if temperatures rise by more than 2°C, and almost all species will go extinct if temperatures rise by 5.8°C (the upper end of the predicted range of temperature increases; S. Williams in litt. 2003, Houghton et al. 2001; see figure). These results are mirrored for other endemic vertebrates (Williams et al. 2003), and dramatically illustrate the need for action to ensure that temperature rises do not exceed c.2°C. If they do, the results for biodiversity will be catastrophic.

Recommended Citation:
BirdLife International (2004) The number of montane endemic birds that go extinct in Australia depends on the degree of warming. Downloaded from http://www.birdlife.org on 22/01/2022

Key message: The extent of warming will be critical
Case studies