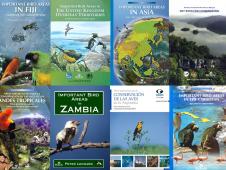 As of 2008, information on Important Bird and Biodiversity Areas for 124 countries and territories has been compiled and published in national and regional directories. The distribution of these reports by BirdLife Partners has produced significant positive impacts, through the provision of scientific data to justify the conservation of these sites.

The first IBA directory was published in 1981 for Europe covered 649 sites in eight countries responding to a 1979 European Community Directive to conserve wild birds occurring in member states territories (Osieck and Mörzer-Bruyns 1981). By 2008, 124 directories covering 124 countries and territories had been produced. There are also regional directories for Europe, Middle East, North America, Africa, Asia and South America.

A study has shown that the distribution of the national and regional IBA directories by BirdLife Partners resulted in recognition of the IBAs as important sites for biodiversity conservation as well as increased profile and credibility for the organisations concerned. The directories were distributed to a wide range of audiences including: staff in government departments, non-governmental organisations (NGOs), corporations, education and research institutions and foreign embassies, local communities, the media, libraries and donors.

There are many good examples of the impact of IBA directories. In Africa, Cameroon Biodiversity Conservation Society was invited by government ministries to join national committees to create protected areas and develop tourism. Ghana Wildlife Society and Nature Kenya gained high credibility and confidence by demonstrating the value of their IBA programmes as part of regional and global networks of important sites for biodiversity. Ethiopia Wildlife Natural History Society and Nature Uganda used their national directories to provide the scientific evidence to justify the designation of IBAs as Ramsar sites. BirdLife South Africa provided vital information to wildlife authorities for the creation of trans-boundary peace parks. The Conservation Society of Sierra Leone has noted that other NGOs use their national directory to develop their environmental education material.

In Europe, IBA directories had great impact on the EU's Natura 2000 network of Special Protection Areas (SPAs). BirdLife Cyprus, for example, used information on IBAs to justify more and larger SPAs. Vogelbescherming Nederland was successful in advocating the use of their IBA directory as the basis for the identification of SPAs resulting in their government designating all IBAs as SPAs.

Other examples come from Sao Paulo, Brazil, where the local government used recommendations from the IBA directory to include Atlantic forest habitat in an adjacent ecological conservation unit. The Yemen Society for the Protection of Wildlife used the regional directory to advocate IBA inclusion in the national ecotourism strategy and in the National Action Plan for Environment and Development (BirdLife International 2007).