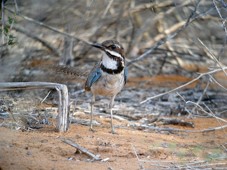 The set of Important Bird and Biodiversity Areas (IBAs) projected to suffer the greatest direct impacts of climate change (and highest rates of turnover of the species for which they were identified) do not entirely match the set of IBAs likely to be indirectly impacted by human response to climate change (those with the greatest projected human vulnerability). Hence, priorities for adaptation interventions need to account for likely human responses to climate change.

Whilst birds are changing their ranges, phenology and species assemblages in response to changing environmental conditions (Crick 2004), humans too are responding to climate change. Humans are already altering agricultural practises (Deressa et al. 2009, Thomas et al. 2007) and fishing grounds (Pinsky and Fogarty 2012) as changing climatic conditions force responses to maintain food security and human health. However, much research looking at the vulnerability of species or sites to climate change focuses solely on the direct impact of climate change (Hole et al. 2009, Bagchi et al. 2013). Modelling vulnerabilities whilst ignoring human responses is likely to largely underplay the vulnerability of species and sites.

Recent work highlights this by conducting a vulnerability assessment of 164 bird species across southern Africa (Segan et al. 2015). Sites and species for which vulnerability outcomes were influenced by the additive effect of human responses were determined. A total of 51 human vulnerability indictors were used to model these indirect impacts, accounting for human exposure, sensitivity and adaptive ability to climate change.

A negative correlation was found between forecasted bird range loss and exposure to impacted human populations suggesting little overlap between areas experiencing direct and indirect impacts. The Madagascan Long-tailed Ground-roller Uratelornis chimaera for example is at little risk of direct impacts of climate change, but third highest from indirect impacts, due to its vulnerability to habitat loss. Areas of high conservation priority identified through conventional modelling methods may therefore be identifying vulnerable species and sites in a biased manner.

Recommended Citation:
BirdLife International (2015) The impact of climate change on human communities significantly alters the vulnerability of IBAs . Downloaded from http://www.birdlife.org on 20/09/2020

Key message: The extent of warming will be critical
Case studies