The IBA network in Uganda is effective at capturing butterflies, dragonflies and some plants 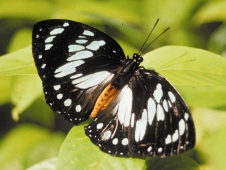 Surveys have shown that at least 73% of all species of butterflies, dragonflies and some families of vascular plant known from Uganda occur in the country’s 30 Important Bird Areas, including at least 82% of butterfly species of highest conservation priority and 86% of all dragonflies species.

Conservation priority score is based upon approximate range size, and varies from 1 (widespread across W, C, E and S Africa to 6 (endemic to the Albertine Rift Valley region or to Uganda). Numbers in columns show the number of butterfly species in each category recorded from IBAs. The hatched horizontal line shows percentage of all butterfly species recorded from IBAs. Tushabe et al. (2006)

The 30 Important Bird Areas (IBAs) in Uganda occupy some 8% of the land surface of the country and include a wide variety of forest, savanna and wetland habitats (Byaruhanga et al. 2001). Comparative studies of the country’s 13 ‘forest’ IBAs have shown they are effective at capturing much forest-dwelling biodiversity in other taxon groups. In a further study, butterflies, dragonflies and some families of vascular plant, as well as birds, have been surveyed in all but one of the remaining 17, mainly savanna and wetland, IBAs in Uganda. The aim was to assess how well the country’s IBA network as a whole captures species diversity in other taxa, across the full range of habitats (Tushabe et al. 2006).

Data from these surveys have been collated with earlier records from the Uganda Forest Department (Howard and Davenport 1996) and other sources. Results for the two insect taxa show that the national IBA network includes most of Uganda’s butterfly and dragonfly biodiversity. Of the 1,249 butterfly species recorded from the country (Davenport 1996, Tushabe et al. 2006), the IBA network captures 73% of the total and 82% of those of highest conservation priority (species endemic to the Albertine Rift or to Uganda) (see figure).

Six Ugandan IBAs have not yet been surveyed for dragonflies. Even so, 86% of the country’s 231 species have already been recorded from the 24 IBAs for which data are available, including 11 of the 13 Ugandan dragonfly species assessed as globally threatened or Near Threatened in a provisional Red List of East African dragonflies (Tushabe et al. 2006).

Data for woody plant species of the families Leguminosae, Rubiaceae and Moraceae were comparable and showed that some 73% of the 1,566 species recorded from Uganda occur in the country’s IBA network. Together, these data suggest that the IBA network effectively captures a large proportion of Uganda’s species-level biodiversity across all main habitats, in only a small proportion of the country’s land area.

Recommended Citation:
BirdLife International (2008) The IBA network in Uganda is effective at capturing butterflies, dragonflies and some plants. Downloaded from http://www.birdlife.org on 20/01/2022