The H5N1 avian influenza virus: a threat to bird conservation, but indirectly 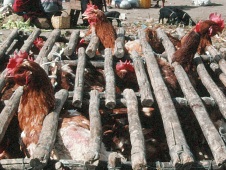 High Pathogenicity Avian Influenza (“bird flu”) is having large-scale conservation impacts not through its effects on wild birds but through its indirect impact on public perceptions and actions towards birds, the environment and conservation.

High Pathogenicity Avian Influenza (HPAI) is a disease of poultry that evolved from milder viral strains naturally occurring within wild bird populations. In recent years a particularly virulent strain of HPAI— H5N1—has caused massive mortality events in domestic poultry flocks and a relatively small number of deaths in humans who had close associations with poultry (Thomas 2005, Werner and Harder 2006, WHO 2008).

H5N1 can also kill wild birds, though its direct conservation impacts on wild bird species has so far been very low. With very few exceptions, incidents of H5N1 among wild birds have been short-lived, self-limiting and involved only small number of individuals. However, the virus is capable of killing large numbers of wild birds under some, apparently rare, circumstances, as in the outbreak at Qinghai Lake, China, in April-July 2005 that killed some 6,000 waterbirds (Chen et al. 2005). H5N1 thus potentially threatens species that congregate in a small number of sites (such as Near Threatened Lesser Flamingo Phoeniconaias minor), though to date only two globally threatened bird species (Endangered Red-breasted Goose Branta ruficollis and Vulnerable Black-necked Crane Grus nigricollis) have been documented with the virus (Chen et al. 2006, OIE 2006).

HPAI has however had significant indirect impacts on conservation. All evidence suggests that the role of infected migratory birds in spreading the disease is very minor, compared to the trade in poultry and poultry products, the trade in cage birds and human movements. Similarly there is only one confirmed case of a wild bird transmitting the disease to a human (a Mute Swan Cygnus olor, to the person plucking its feathers).  However, misinformation and media hysteria, especially in the early days of H5N1’s spread out of south-east Asia, has generated public misunderstanding and led to wild migratory birds being blamed and persecuted as the vehicles of H5N1 transmission (FAO 2005, Feare and Yasué 2006, Sims and Narrod 2008). The fears surrounding wild birds and H5N1 created political pressure for ill-advised policies such as wild-bird culling, harassment and nest destruction, especially near areas of human habitation. As a result, some governments revived plans to destroy wetland habitats in order to deny wild waterfowl their landing and breeding areas. These measures put wild birds and other biodiversity in jeopardy, while being entirely ineffectual in preventing the spread of the disease. Public paranoia exhibited itself in fewer visitors to nature reserves, a reduction in the number of people feeding garden birds and the dumping of exotic bird pets. Conservation work itself was also affected, with reductions in ringing and surveying activities being reported anecdotally (Feare 2005, Thomas 2005).

More recently, H5N1 has become an endemic problem in some countries, while the immediate threat of a human influenza pandemic appears to have receded. There is general scientific consensus about the minor role that wild birds play in spreading the disease, and public paranoia has substantially subsided. This has not stopped wild birds being blamed, almost automatically, when new H5N1 outbreaks occur. The need to counter misinformation and glib, unfounded assumptions and assertions still remains.

Recommended Citation:
BirdLife International (2008) The H5N1 avian influenza virus: a threat to bird conservation, but indirectly. Downloaded from http://www.birdlife.org on 29/09/2022