The Goldfinch in Renaissance art 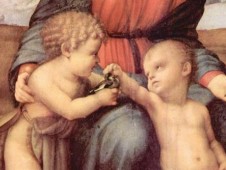 Madonna of the Goldfinch by Raphael

The distinguished ornithologist Herbert Friedmann (1946) traced no fewer than 486 devotional pictures containing the Goldfinch attributed to 254 artists, 214 of them Italian.

The bird that repeatedly, almost obsessively, turns up in Renaissance religious painting is the European Goldfinch Carduelis carduelis, almost always in the hands of the Infant Jesus, and symbolising variously the soul, resurrection, sacrifice and death, but with a particular further dimension of meaning, following the plagues of the fourteenth century, as an augur (and hence relating to the healing of the sick, and thus redemption). The distinguished ornithologist Herbert Friedmann (1946) made a scholarly study of this phenomenon in which he traced no fewer than 486 devotional pictures containing the Goldfinch attributed to 254 artists, 214 of them Italian. Some of the most famous artists to make use of the theme are Leonardo da Vinci (Madonna Litta, 1490–1491), Raphael (Solly Madonna, 1502, and Madonna of the Goldfinch, 1506), Zurbarán (Madonna and Child with the Infant St John, 1658) and Tiepolo (Madonna of the Goldfinch, 1760), while Piero della Francesca’s Nativity (1470) obliquely nods to the convention by putting the birds to one side in the grass, and Michelangelo’s marble relief (Madonna and Child with the Young St John—the Taddei tondo, 1502) makes a real drama with a startled Infant Jesus recoiling from the fluttering bird in John’s hand. Two delightful variations on the theme, taking it into the secular realm but doubtless with conscious echoes of higher meaning, are Bronzino’s Giovanni de’ Medici as a Child (1545), showing a cheerful little boy, his two front teeth just through, clutching a Goldfinch rather too enthusiastically, and Goya’s Don Manuel Osorio Manrique de Zúñiga (1790), a delicate small lad with a Magpie Pica pica on a string, three cats not daring to pounce on it, and a cageful of Goldfinches by his side (Collar et al. 2007).

Recommended Citation:
BirdLife International (2008) The Goldfinch in Renaissance art. Downloaded from http://www.birdlife.org on 16/08/2022