The Gola National Park in Liberia: Realising the potential of a transboundary peace park 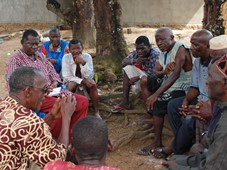 The largest remaining area of Upper Guinea forest, home to a diversity of endemic species, and the ecosystem services on which millions of West African people depend, straddles the border between Sierra Leone and Liberia.

Since the early 1990's BirdLife Partners have been working with the government and people of Sierra Leone to conserve their part of the forest, which is now protected as the Gola Rainforest National Park.

But because of the long and bloody civil war, the two-thirds of the forest which lies within Liberia has enjoyed no such protection. In 2009, the president of Liberia and Sierra Leone announced a project to reunite the Gola forest as a Transboundary Peace Park. With financial backing from the European Union, the project is being coordinated by the BirdLife Africa Partnership, and involves the BirdLife Partners in Sierra Leone, Liberia, the Netherlands, and the UK, together with the forestry departments of Liberia and Sierra Leone.

A critical grant from the Aage V. Jensen Charity Foundation is funding BirdLife's Gola forest conservation work in Liberia. BirdLife Partner the Society for Conservation of Nature in Liberia (SCNL) is conducting consultations with forest-edge communities around the proposed Gola National Park, and organising their participation in the demarcation of the park boundary. Workshops are bringing together the staff of Liberia's Forestry Development Authority (FDA) with their counterparts in Sierra Leone, to review and harmonise policies, legislation and management processes to enable them to collaborate and share resources across the border.

The staff of the Gola National Park is being given the training and equipment they need to carry out regular patrols, control illegal activities, and work with the forest communities.  SCNL's successful alternative sustainable livelihoods programme will be extended to all the communities within the park. SCNL, FDA and key leaders and representatives from forest communities and their Site Support Groups are developing a participatory biodiversity and threat monitoring programme.

The Transboundary Peace Park already enjoys the support of both governments. Thanks to the work funded by the AVJCF, the local people most directly affected have also given their consent to the new protected area, in the knowledge that they will share in the benefits it brings in the form of better, more secure livelihoods, and an end to decades of conflict.

The Gola Forest National Park gazettement in Liberia: an update

Society for the Conservation of Nature in Liberia

Recommended Citation:
BirdLife International (2015) The Gola National Park in Liberia: Realising the potential of a transboundary peace park. Downloaded from http://www.birdlife.org on 09/08/2022