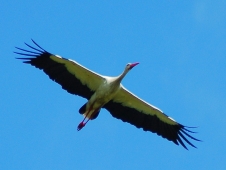 Many of the world’s migratory species are in decline, assailed by multiple threats, including habitat destruction and degradation, illegal and unsustainable hunting, infrastructure development, climate change and disease. Their conservation depends on a coordinated response on a global scale. Flyways provide a framework that can help forge international collaboration and focus attention on the strategic needs of migratory birds.

Global flyway boundaries developed for waders (see Boere and Stroud 2006) were refined using digitized range boundaries of all migratory species. The methodology used to assign species to flyways is as follows: (a) they are considered fully migratory by BirdLife; (b) they undertake a regular biannual movement; (c) they move between a distinct breeding area and a distinct non-breeding area; (d) the direction of movement is essentially latitudinal (N–S); (e) all individuals in a population migrate

The geographical area covered by a migratory bird over the course of its annual cycle, encompassing breeding and non-breeding grounds and the connecting migration route, is known as a flyway (Kirby et al. 2008). The effective conservation of a migratory species requires coordinated action along the entire length of its flyway. For instance, adequately safeguarding a migrant’s breeding grounds will be insufficient if critical wintering sites are being lost or if the population is sustaining heavy hunting pressure during its passage. The flyways concept is therefore an important tool for galvanising international conservation action.

Typically, migration follows a north–south axis with birds moving to milder climes at lower latitudes for the duration of their non-breeding season (Newton 2008). The energetic costs associated with migration mean that birds are under pressure to use the shortest possible route; however, the precise course taken will depend on weather patterns, en route resources and the geographical features they encounter. Thus, routes often follow mountain ranges, watercourses and coastlines, avoid large bodies of open water and take advantage of prevailing wind patterns and updrafts. As a result, a number of species often share analogous flyways, especially those with similar biological and ecological traits. For example, waterbirds require a route encompassing a number of highly-productive staging sites, whilst soaring birds, which rely on updrafts and thermals, must seek out narrow straits and ‘land-bridges’ in order to cross open water. Identifying these key routes and migration bottlenecks is an important step in the conservation of migratory birds.

These global flyways are a considerable oversimplification of the complex journeys undertaken by the world’s 2,274 migratory species (Kirby 2010). For example, many migratory routes do not follow a north–south axis. In the southern hemisphere, avian movements are often linked to patterns of rainfall. As a result, they are often less latitudinal than the seasonal round-trips of northern migrants (Dingle 2008). Likewise, few seabird movements conform to these flyways. It is also important to note that very few species utilise the full extent of any flyway. Indeed, only a small number of birds actually undertake trans-equatorial migrations (see table). Those that do, such as Whimbrel Numenius phaeopus, Ruddy Turnstone Arenaria interpres, Sanderling Calidris alba and Barn Swallow Hirundo rustica, are often ubiquitous across all flyways.

The twice-yearly redistribution of billions of individual birds across the Earth’s surface clearly involves a myriad of intricate, crisscrossing migration routes that cannot be easily distilled into eight generalised flyways. However, in order to deliver effective conservation there is a compelling need to simplify these real-world complexities. Around the world migratory birds are under intense pressure from a range of threats. Their effective conservation requires a coordinated trans-boundary response from both governments and conservationists. Global flyways are an important advocacy tool that can help coordinate conservation action, foster political cooperation and frame multilateral legal agreements.