The EU failed to meet its 2020 target for birds 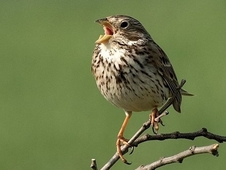 The European Union’s Biodiversity Strategy to 2020 included a target to increase the proportion of bird species assessed under the Birds Directive with a secure or improving population status in the EU from 52% to 78% by 2020. A report published by the European Commission in 2020 shows that, despite initial progress and improvements in some Member States, this target was not met.

Percentage of bird species with secure or improving population status in the EU.

The EU Birds Directive aims to protect all 500 wild bird species occurring naturally in the European Union. EU Member States must maintain bird species populations at a level corresponding to ecological, scientific and cultural requirements, and report to the European Commission on population status and trends every six years. In 2020, a report by the Commission documented the status and trends reported by 28 Member States covering 2013-2018, and assessed the extent to which EU biodiversity targets for 2020 had been met (European Commission 2020).

Target 1 of the EU’s Biodiversity Strategy to 2020 was to “halt the deterioration in the status of all species and habitats covered by EU nature legislation, and achieve a significant and measurable improvement in their status”. This included the goal of 78% of species assessed under the Birds Directive having a secure or improving population status, representing an increase of 50% on the baseline figure of 52% (BirdLife International 2004). An interim assessment in 2015 showed some progress towards this goal, with 61% of species assessed as being in target condition, but by 2020 only 57% of species were secure or improving.

The 2020 assessment revealed that 19% of bird species are Threatened in the EU, while 20% are Near Threatened, Declining or Depleted, and 14% have an Unknown status owing to a lack of reliable data. The proportion of birds in Secure status declined from 52% in 2015 to 47% in 2020. Almost a third of breeding bird species assessed show short-term (12-year) declines. Since 2015, the proportion of bird species with increasing short-term population trends has fallen, while the proportion with stable or fluctuating trends has risen. Long-term (38-year) trends tell a similar story, showing that a greater proportion of species’ populations are declining (32%) than are increasing (29%).

Evidence that the Birds Directive is effective include scientific studies showing positive correlations between the extent of conservation measures taken by Member States and the population trends of target species (Donald et al. 2007, Sanderson et al. 2015). In 2016, a comprehensive evaluation by the European Commission itself concluded that it remains highly relevant and fit for purpose. Challenges that sometimes prevent its goals from being fully achieved include poor and uneven implementation, insufficient financing, and a failure to mainstream biodiversity in other sectoral policies. Under the new European Green Deal and the EU Biodiversity Strategy for 2030, Member States have an opportunity to address these shortcomings.

European Commission (2020) The state of nature in the European Union: Report on the status and trends in 2013-2018 of species and habitat types protected by the Birds and Habitats Directives. Brussels, Belgium: European Commission. Available at https://eur-lex.europa.eu/legal-content/EN/TXT/?uri=COM:2020:635:FIN