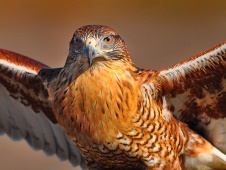 An Environmental Impact Assessment, which included an ornithological assessment, has influenced the design and siting of turbines at a wind farm in Wyoming, USA. The ornithological assessment revealed how birds of prey use the site. This information informed the precise placement and orientation of turbines (micro-siting) and so helped reduce the collision risk to resident raptor species.

The ‘micro-siting’ of turbines within a wind farm development, informed by the outcomes of an Environmental Impact Assessment (EIA) and ornithological surveys, can reduce negative impacts on birds and other biodiversity. It is vital that the precise siting of turbines is informed by appropriate surveys and that on-going monitoring activities are carried out so that the effectiveness of these measures can be assessed.

The Foote Creek Wind Farm was the first wind farm located in Wyoming, USA, and became operational in 1999. The project is located at one of the windiest places within the state and is partially situated on public land. The initial phase of the wind farm was just over 11 km in length and ran north to south. The original wind farm had 69 turbines and a generation capacity of 85 megawatts (MW). Several subsequent phases have since been constructed, and the project now totals 183 turbines with a generating capacity of 134.7 MW.

The site is located on a prominent mesa with steep slopes on the east and west sides. Initial avian studies revealed that 85% of Golden Eagles Aquila chrysaetos, Ferruginous Hawks Buteo regalis and Swainson’s Hawks Buteo swainsoni using the area were flying at the height of the rotor blades and within 50 m of the turbines (Strickland et al. 1998). Thus, the development presented a serious threat to the resident raptor species.

As a result of these post-construction ornithological assessments, an 80 m ‘setback’ of turbines was proposed to reduce the risk of impacts, and the operator SEAWEST instigated a 50 m setback from the ridge edge. Subsequent monitoring studies have shown low raptor fatality rates at the site. Elsewhere in Wyoming, a recent wind farm development at White Mountain also instigated a 50 m setback from drainage areas in order to mitigate the risk to birds and mammals (Jakle 2012, White Mountain Wind Environmental Assessment 2010).

Recommended Citation:
BirdLife International (2013) The design and siting of wind turbines can reduce the risk of collision to birds of prey. Downloaded from http://www.birdlife.org on 28/11/2022