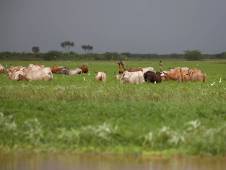 Kenya’s Tana River Delta is a globally Important Bird Area for several threatened species and many migratory waterbirds, and home to indigenous people who rely on the seasonal flooding for soil fertility to grow rice and graze cattle. A proposal to develop irrigated sugarcane plantations for biofuel production would have serious impacts on water flow, negatively affecting wildlife and livelihoods, but has not yet been formally rejected.

Developers are planning to establish 20,000 hectares of sugarcane plantation in the Tana River Delta on the northeast coast of Kenya partly for biofuel production (Matiku 2007). This proposal has been called a ‘national disaster’ by local environmentalists.

The 130,000-hectare Tana River Delta consists of a series of complex and seasonally flooded habitats, and is an Important Bird Area with more than 345 species of birds, including the threatened Basra Reed Warbler Acrocephalus griseldis and Tana River Cisticola Cisticola restrictus. No fewer than 22 species with internationally important populations have been recorded there, making the delta one of the key sites in Kenya for bird conservation.

The delta is inhabited by indigenous and minority groups including the Orma, Wardei and Pokomo people. These groups live by the seasons, using centuries-old practices to grow rice, relying on the seasonal flooding to keep the area fertile. In the dry season, the delta provides critical grazing grounds for many thousands of cattle from the surrounding drylands.

The $370 million sugarcane scheme, submitted by Mumias Sugar Company and Tana and Athi River Development Authority, proposes nearly 50,000 acres of irrigated sugarcane, together with sugar and ethanol plants. Local community livelihoods are likely to be severely impacted by any large-scale irrigation project. The irrigation requirement of a large sugarcane project adjacent to the delta would seriously affect water flow into the Tana River Delta, as well as causing build up of infertile salts in the soil and the discharge and run-off of polluted agricultural effluents, degrading the quality of the entire wetland ecosystem.

If the project goes ahead, it is estimated that up to one-third of the water flow into the delta may be reduced during the dry season (Kenya Wetland Forum 2007). This will cause severe competition for water resources between the sugar project, other development projects and downstream domestic livestock, wildlife, fisheries and ecosystem needs, affecting not just wildlife, but local livelihoods as well.

In June 2008, the proposal was approved by the Kenyan Government’s National Environment Management Authority. However, in July 2008, a High Court injunction won the delta a temporary reprieve. It stopped Mumias Sugar Company from making any further decisions regarding implementation of the sugar project, halted the Tana River County Council from taking any action in respect to the land which is the subject of the suit, and barred Kenya’s Commissioner of Lands from issuing a title deed for the land and the Water Resources Management Authority from issuing a water permit to the Tana Integrated Sugar Project. The final outcome remains to be seen.