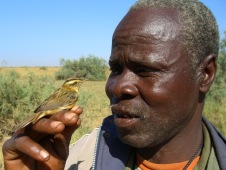 The African wintering grounds of the Aquatic Warbler Acrocephalus paludicola—Europe’s rarest migratory songbird—were only discovered in 2007 by researchers from BirdLife International and the Royal Society for the Protection of Birds (RSPB; BirdLife in the UK). Using stable isotope analysis, the expedition was able to locate the birds within Djoudj National Park, an Important Bird Area (IBA) in north-west Senegal. Although other wintering sites may exist elsewhere in the region, none have yet been found. Nevertheless, equipped with this information, conservationists are in a much better position to safeguard the species.

Migration route of the Aquatic Warbler

The Aquatic Warbler Acrocephalus paludicola is assessed as ‘Vulnerable’ by BirdLife International for the IUCN Red List of Globally Threatened Species. Formerly, the species bred throughout Europe; however, during the 20th century it suffered a precipitous decline across western and central Europe and is now extinct in France, Belgium, Netherlands, western Germany, Czech Republic, Slovakia, Austria, Italy and the former Yugoslavian nations. Today, the species is confined to fewer than 40 regular breeding sites scattered across seven countries (see map).

The Aquatic Warbler is a habitat specialist, dependent during the breeding season on sedge fen mires with an optimal water depth of between 5–10cm. Throughout Europe, this habitat has disappeared. Drainage for agriculture, urbanisation and peat extraction as well as the abandonment of traditional management practices has resulted in the wholesale loss, fragmentation and deterioration of Europe’s wetlands.

Following breeding, the Aquatic Warbler begins its migration to West Africa. The autumn passage takes the birds along the Atlantic coastline through Germany, Belgium, France, Spain and west Africa to wintering grounds south of the Sahara. During migration, the species utilises stands of sedge and reed along estuaries, rivers and coastal lagoons. Passage records from northern Italy, Switzerland, south-east France and south-west Germany suggests that the birds take a more direct route during their return migration in spring.

Until recently the location of the Aquatic Warbler’s African wintering grounds was unknown, hampering efforts to conserve the species. However, in 2007, following five years of investigation, a research team from BirdLife International and the Royal Society for the Protection of Birds (RSPB; BirdLife in the UK) finally succeeded in tracing the birds to an area of north-west Senegal.

In the past, unraveling the migration routes undertaken by birds relied on direct observations or large-scale ringing (banding) recoveries. Although this approach has elicited considerable information about migration, it is often difficult to acquire knowledge on rare and inconspicuous species. More recently, satellite telemetry has been used to follow migratory species; however, this technique is inappropriate for many taxa that are too small to carry transmitters. Increasingly, stable isotope analysis is being used to determine the movements of migratory animals. The heavy isotope composition of rain and snow varies around the world and is incorporated, via diet, into animal tissue. This allows scientists to trace the geographical origins of animals by examining the isotopic composition of their tissues (Pain et al. 2004).

Knowing that the Aquatic Warbler grows flight feathers on the wintering grounds, the research team analysed feathers from individuals trapped in Europe. They then compared the isotope profiles of the feathers with isotope maps of West Africa. This information led the team to an area of north-west Senegal in and around Djoudj National Park—an Important Bird Area (IBA). Here they were able to capture 58 Aquatic Warblers, confirming that they had indeed discovered the species’s wintering grounds (Walther et al. 2007). It is now believed that between 5–10,000 birds are present at this single site and that virtually the entire population may be confined to a relatively small area along the lower Senegal river in Senegal and neighbouring Mauritania. Equipped with this information, conservationists are in a much better position to safeguard the species.