Small island birds are most at risk from invasive alien species 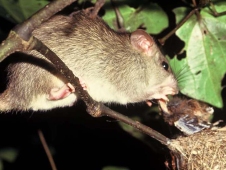 Rats are a threat to the native birds of New Zealand. © David Mudge

Three-quarters of all threatened bird species occurring on oceanic islands are at risk from introduced species. Invasive predators represent the greatest threat, but the impacts of habitat modification by herbivores and reduced fitness resulting from introduced micro-organisms are also causing extremely rapid declines.

In total, 473 threatened birds (32% of the total) are threatened by invasive non-native species and diseases. The majority of species at risk from invasive species are affected by introduced predators; rats and cats are far and away the most severe threat impacting 239 and 204 threatened species respectively (see figure). The problem is especially acute on islands, 74% of threatened species on oceanic islands are threatened by invasives (see figure), where long isolation has led to the evolution of species that often lack adequate defences against introduced species.
One such example are the Galápagos Islands. Comprised of 129 islands and islets, it is recognized as a World Heritage Site because of its unique assemblage of flora and fauna (UNESCO). Despite the relatively brief human occupation, having only been discovered in 1535, more than 750 alien plants (Guézou et al. 2010) and 44 species of alien vertebrate (Phillips 2012) have invaded the Galápagos Islands. Some species, particularly alien vertebrates, are having devastating effects on the Galapagos’ biodiversity (Bensted- Smith 2002), including several bird species (Wiedenfeld & Jimenez 2008). Of the 41 bird species living on the Galapagos Islands, 21 are globally threatened and of these 19 (90%) are threatened by at least one invasive species.

Some species, such as the Critically Endangered Galapagos Petrel Pterodroma phaeopygia, are subject to multiple impacts from a range of alien species. Known to breed only on five islands in the Galapagos Archipelago, the Galapagos Petrel has undergone an extremely rapid decline since the early 1980. Nesting habitat has been reduced and degraded as a consequence of agricultural activities and the rapid expansion of the introduced blackberry Rubus spp. (Cruz-Delgado 2010a); Furthermore, high mortality rates of eggs and nestling, as a result of introduced rat Rattus spp., have severally reduced its reproductive success (Cruz-Delgado 2010b).
Similar trends are reported elsewhere, a total of 390 islands worldwide support populations of one or more Critically Endangered or Endangered species and one or more vertebrate invasive alien species that threatens them (see figure). These islands represent priorities for eradication or control of the invasive aliens in order to mitigate the threat they pose.

Recommended Citation:
BirdLife International (2017) Small island birds are most at risk from invasive alien species . Downloaded from http://www.birdlife.org on 07/12/2022