Security or sustainability first? The fate of Endemic Bird Areas depends on the choices we make 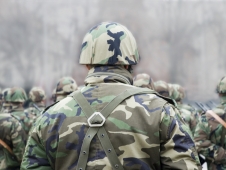 The future expansion of agricultural land under four global development scenarios show that Endemic Bird Areas will be more affected than the world as a whole. The impacts of the choices we make will be amplified in some of the world’s most important places for birds and other biodiversity.

(a) Predicted expansion of agricultural land to 2050 under two GEO3 scenarios: (i) ‘Security First’ and (ii) ‘Sustainability First’ 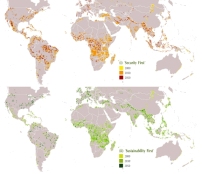 Colours indicate the period in which habitats that have been little modified by human activity will be converted to agricultural land. Alcamo et al. (1998)

It is hard to foresee the future. To help, we can use scenarios—descriptions of possible futures based on a variety of assumptions, uncertainties and anticipated new factors. Scenarios do not predict the future, but they sketch out what might happen under different assumptions. For the Global Environment Outlook 3 (UNEP 2002), the United Nations Environment Programme (UNEP) outlined four plausible scenarios:

1. ‘Markets First’: a world in which market-driven developments converge on the values and expectations that prevail in industrialised countries.

2. ‘Policy First’: a world where strong actions are taken by governments to reach specific social and environmental goals.

3. ‘Security First’: a world of great disparities, where inequality and conflict prevail, brought about by socio-economic and environmental stresses.

4. ‘Sustainability First’: a world in which a new development paradigm emerges in response to the challenge of sustainability, supported by new, more equitable values and institutions.

(b) Differences in the future expansion of agricultural land under four global development scenarios, comparing Endemic Bird Areas with the world as a whole Under each scenario, the spatial extent of future agricultural land has been modelled by the Netherlands National Institute of Public Health and the Environment (RIVM) (Alcamo et al. 1998). Distributions of cropland and pasture are allocated to half-degree squares, taking into account current ecosystems, soil suitability and irrigation potential (see figure a).

What are the implications for birds? By 1995, agriculture was estimated to cover 37% of the world’s land surface. The model predicts that this would rise to 43% by 2050 under the ‘Security First’ scenario, compared to no change under ‘Sustainability First’. Endemic Bird Areas (Stattersfield et al. 1998), already have a much higher proportion of land under agriculture, c.42%, than the world as a whole. Under the ‘Security First’ scenario, 56% of their area is likely to be used for agriculture by 2050. In contrast, under the ‘Sustainability First’ scenario this figure might rise only to 45%, not much greater than today’s level (figure b). This difference is very sizeable. The impacts of the choices we make will be amplified in some of the world’s most important places for birds and other biodiversity.

Which world will people inhabit five decades from now—and what wild birds will it retain? The choices are ours.

Recommended Citation:
BirdLife International (2004) Security or sustainability first? The fate of Endemic Bird Areas depends on the choices we make. Downloaded from http://www.birdlife.org on 20/01/2022