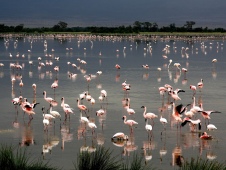 In 2005, the Kenya Government proposed to degazette Amboseli National Park (one of Africa’s spectacular sites of global significance) to a game reserve, contravening the procedures set out in the country’s Wildlife Act. After a five year campaign, spearheaded by Nature Kenya (BirdLife in Kenya), the Kenyan High Court reversed the decision, declaring the move to ‘de-gazette’ Amboseli illegal. This demonstrates the important role that civil society organisations can play in challenging actions that threaten biodiversity.

On the 28th September 2005, the President of Kenya asked the Minister for Tourism and Wildlife to publish Legal Notice 120 in the Kenya Gazettement Supplement No. 20, declaring that Amboseli National Park (an Important Bird Area and a UNESCO Man and the Biosphere Site) would henceforth become a Game Reserve. This meant that the management of the park was removed from the Kenya Wildlife Service (KWS) and placed in the care of the Olkejuado County Council.

Concerned that this change in protection status would result in increased human use and negative impacts to biodiversity, many civil societies (including Nature Kenya: BirdLife in Kenya, Born Free Foundation Kenya, the East African Wild Life Society, the David Sheldrick Wildlife Trust, Youth for Conservation Kenya, the East Africa Environmental Network, and the Kenya Tourism Federation) and wildlife experts opposed the move. In their view, the degazettement of the national park was illegal and would have far-reaching and potentially devastating effects. Wildlife tourism is one of Kenya’s main sources of foreign revenue, and Amboseli brings in about $3.3 million a year from park fees and related tourist activities. Many believed this money would be jeopardised if Amboseli’s National Park status was lost.

The civil societies filed two cases in the High Court of Kenya: firstly, to challenge the government decision to degazette the park without following due process of the law as set by the Wildlife Act and, secondly, to set an injunction on the decision so that Amboseli would remain a national park under the care of KWS until the case was determined. The case has gone through a long and protracted process, but, in 2010, the High Court of Kenya finally overturned the order to ‘downgrade’ Amboseli National Park to a game reserve, ruling that the move was illegal.

Thanks to a long, hard-fought campaign the future of Amboseli, and the wildlife it supports, has been secured. The process is testament to how civil societies can stimulate public debate and challenge actions that threaten biodiversity.