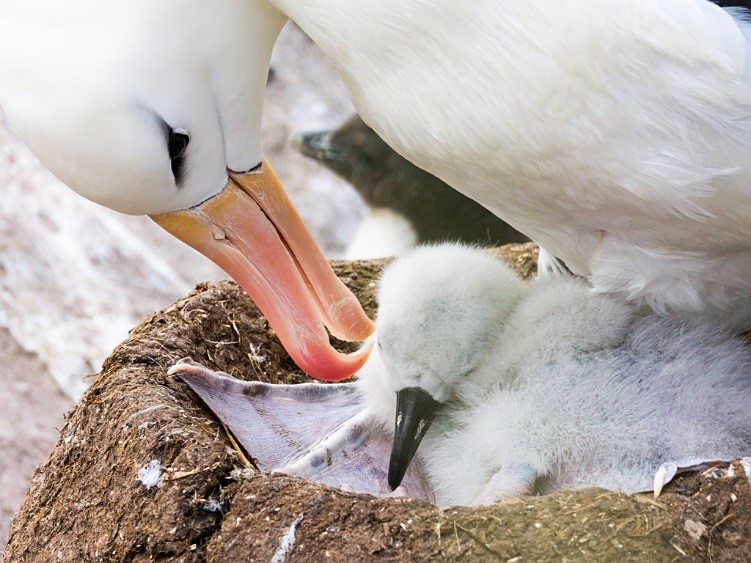 Trawl fisheries cause staggering levels of seabird bycatch, particularly large-bodied albatrosses and petrels. These beautiful migratory birds undertake epic journeys and are attracted to the easy meals that discarded fish offal from commercial trawl fisheries present. This feeding prospect lures them dangerously near to boats where they often collide with warp cables or become entangled in nets during the later stages of hauling. Up to 40 species are thought to be affected, with tens of thousands estimated to be dying each year.

An illustration of how seabirds are caught by Trawl fisheries 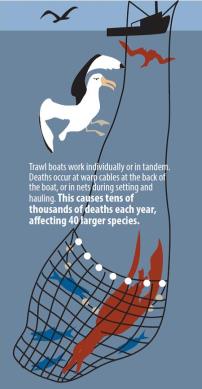 While seabird bycatch in long-line fishing has been known since the 1980s, the threat posed by trawl fisheries has only become apparent in more recent years (Bartle 1991, Weimerskirch et al. 2000, Sullivan et al. 2006). No global review of the impact of trawl fishing on seabirds has been undertaken, but there are a number of regional and national levels studies that highlight the significance of the problem (Wilson et al. 2004). Currently, BirdLife International’s Albatross Task Force is working with fishermen and local communities worldwide to test mitigation strategies that will reduce the unsustainable levels of seabird bycatch. Albatrosses are especially hard-hit as they lay a single egg every one or two years and take 7 – 13 years to reach sexual maturity.

The Humboldt Current and turbid waters of the southern cone are incredibly productive upwelling zones, supporting a wealth of biodiversity. In Argentina, studies (Gonzalez-Zevallos et al. 2007, Yorio et al. 2010) on Magellanic Penguin Spheniscus magellanicus and Imperial Shag Phalacrocorax atriceps breeding at a newly designated marine park in Golfo San Jorge assessed the potential spatial conflict between these seabirds and commercial hake and shrimp trawl fisheries. The observed foraging patterns suggest a high probability of spatial conflict and incidental mortality was regularly recorded in both fisheries, at rates that varied between 0.02 and 0.34 individuals per haul depending on species and fishery (Yorio et al. 2010).

Tracks of foraging Magellanic Penguin instrumented at Caleta Malaspina during the chick stage of 2006 (a and c) and 2007 (b and d), and spatial distribution of hauls made by hake trawlers (a and b) and shrimp trawlers (c and d) between November 15 and March 15 of the 2001–2007 fishing seasons at Golfo San Jorge, Argentina. Grey areas indicate the areas of high intensity use by hake and shrimp trawl fisheries (95, 75 and 50% kernel contours). 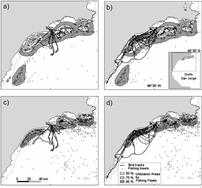 In the Falklands/Malvinas, Sullivan et al. (2006) estimated that >1,500 seabirds, predominantly Black-browed Albatross Thalassarche melanophris (pictured above), were killed by demersal (bottom) finfish trawlers in 2002/2003. A chick like the one pictured will be incubated and nurtured for seven to eight months until it is ready to fledge, during which time parents will take turns between foraging for food and protecting their chick. As such, chicks are left incredibly vulnerable if either parent is killed. Data released in 2017 has revealed the sheer extent of bycatch in Argentinian and Chilean fisheries; approximately 25,000 seabirds, predominantly albatrosses, are drowned by trawl fisheries in South America each year. The Albatross Task Force has demonstrated through trials that this figure could be reduced by 85% if the same mitigation strategies that have been so successful in South Africa can be applied in South America. The signing of the Valdivia Declaration in January 2017 marks the beginning of new regulations and increased monitoring efforts to reduce the senseless volume of seabird deaths in these fisheries.

Historically the Bengula Current (covering the Exclusive Economic Zones of South Africa, Namibia, Angola, and adjacent international waters) has had high levels of seabird bycatch in trawl fisheries (Petersen et al. 2007, 2008). In 2005/06 it was estimated that 18,000 seabirds were killed in the South African hake trawl fishery, one of the first trawl fisheries in which this problem was identified (Watkins et al. 2008). In South Africa, it was estimated that 85% of birds were killed by the powerful warp cables that attach the trawl net to the fishing vessel, entangling particularly the long-winged albatrosses and dragging them under the water. The remaining 15% died entangled in nets during shooting and hauling (Watkins et al. 2008). Of the birds killed, 70% were Shy Albatross T. cauta and Black-browed Albatross T. melanophrys, 14% were Cape Gannet Morus capensis, and 9% White-chinned Petrel Procellaria aequinoctialis. All of these species are globally threatened or near-threatened. BirdLife International’s Albatross Task Force has been working with the trawl fleet in South Africa since 2006 to reduce this bycatch, and began work in Namibia in 2008. This work has succeeded in greatly reducing the scale of the problem in these areas; albatross bycatch has reduced by 99% in South Africa’s hake trawl fishery. Meanwhile the same simple, cost-effective mitigation strategies are saving an estimated 30,000 seabirds per year in Namibia and helping to empower women in the process.

Petersen, S. L., Honig, M. B. and Nel, D. C. (2007) The impact of longline fisheries on seabirds in the Benguela Current Large Marine Ecosystem. Pp 9–31 in S. Petersen, D. Nel and A. Omardien, eds, Towards an ecosystem approach to longline fisheries in the Benguela: an assessment of impacts on seabirds, sea turtles and sharks. WWF South Africa Report (Series - 2007/Marine/001).