The North Atlantic Current and Evlanov Sea-basin (NACES) MPA covers 600,000km2 of ocean and protects one of the most important concentrations of migratory seabirds in the Atlantic. The site was identified from seabird tracking data through a collaborative analysis led by BirdLife International, and represents the first ever marine protected area on the High Seas designated on the basis of tracking data.

Location of the NACES MPA in the North Atlantic. Twenty-one seabird species use the site from 56 colonies in the Atlantic. Lines indicate the number of species travelling to the site. 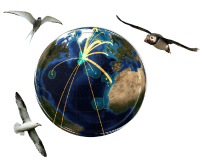 In 2016, BirdLife International led a collaborative analysis to address an identified gap in the network of marine protected areas in the North Atlantic, under a regional mechanism to protect the marine environment of the North-East Atlantic, known as the OSPAR Convention. BirdLife International sought collaboration with researchers via the Seabird Tracking Database to gather all relevant seabird tracking data that overlapped with the OSPAR Maritime Area. Following a workshop with data holders to discuss the analytical approach, over 2,000 seabird tracks were analysed, which revealed an Important Bird and Biodiversity Area (IBA), now known as the NACES MPA.

The NACES MPA is a major foraging hotspot and is estimated to be used by up to 5 million birds throughout the year, travelling from a minimum of 56 colonies across 16 countries in both the North and South Atlantic. Twenty-one different species have been tracked to the site, including boreal breeders such as Arctic Tern Sterna paradisaea, Long-tailed Jaeger Stercorarius longicaudus and Cory's Shearwater Calonectris borealis that use the site as a staging area to fuel their trans-equatorial migrations. By contrast, South Polar Skua Catharacta maccormicki, Great Shearwater Ardenna gravis and Sooty Shearwater Ardenna grisea migrate up to 13,000 km from the Southern Hemisphere to spend their winter at the site. Many of the seabirds travel huge distances to forage in the MPA, with some using it year-round, which suggests that the food availability in the area is consistently high.

Information on the importance of the site and a proposal to designate it as a marine protected area was first presented to the OSPAR Commission in 2016 by BirdLife International, who are an Observer to the Convention. The proposal passed through three full meeting cycles, underwent a range of edits and revisions, and finally gained the support of all Contracting Parties. On the 1st October 2021, the NACES MPA was officially designated by the OSPAR Commission, making it the first MPA on the High Seas to be identified from tracking data.

Negotiations on a new global governance framework for the High Seas – known as the BBNJ Agreement – are well underway, with a fourth session of negotiations scheduled for March 2022. Once finalized, this Agreement will provide a much-needed mechanism for holistic protection of the currently poorly protected High Seas. Under this forthcoming Agreement, there is a significant and unique opportunity for the NACES MPA to act as an exemplar for the application of tracking data for conservation outcomes, alongside furthering the protection of migratory marine species.

Paper: Full details on the identification and importance of the NACES MPA

Paper: How tracking data can provide a data-driven approach to advance protection of the high seas

Paper: The importance of the high seas for albatross and petrels