Seabird communities are declining in the Southern Californian Current System 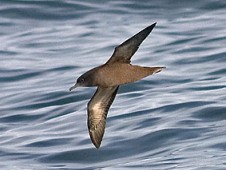 Sooty Shearwater Puffinus griseus numbers off the coast of Southern California declined by 90% between 1987 and 1994. © Ben Lascelles/BirdLife

The nutrient-rich waters of the California Current System support millions of seabirds, fish and marine mammals. However, recent seabird declines in the region suggest that climate change may have a profound impact on this important marine ecosystem and on other ‘high-productivity’ ocean systems around the world.

The California Current System is one of four ocean currents that make up the North Pacific Gyre—a swirling vortex rotating clockwise around the northern basin of the Pacific Ocean. The 200 mile wide California Current moves cold northern waters southwards along the western coast of North America from British Columbia to Baja California. The waters are further cooled by extensive coastal upwelling driven by the prevailing northwesterly winds. The nutrient-rich waters that are brought to the well-lit surface promote the growth of phytoplankton. Consequently, the area is highly productive and capable of supporting large populations of seabirds and other marine life.

In recent decades, ocean surface temperatures along the West Coast of North America have increased significantly leading to a dramatic decline in plankton biomass (Roemmich and McGowan 1995). This reduced ocean productivity has had a knock-on effect further up the food chain, with population declines reported in several marine groups including reef fishes (Holbrook et al. 1997) and seabirds (Veit et al. 1996, Hyrenbach and Veit 2003). Most dramatically, the number of visiting Sooty Shearwater Puffinus griseus dropped by 90% during a period of ocean warming between 1987 and 1994 (Veit et al. 1997).

Different seabird assemblages are adapted to exploit different oceanic conditions. In high productivity regions, such as the California Current System, diving species prevail. These species require high prey densities to meet the substantial energetic requirements associated with this foraging method. In contrast, areas of low productivity tend to have a depauperate seabird community dominated by plunging and surface-foraging birds.

Research off southern California (Hyrenbach and Veit 2003) has found that, concurrent with rising ocean temperatures, there has been a significant decline in seabird abundance—with particular losses of cold-water taxa, such as Cassin’s Ptychoramphus aleuticus and Rhinoceros Auklet Cerorhinca monocerata. This suggests that the seabird communities in the region could shift from a ‘high-productivity’ assemblage, typical of subpolar oceans, to a ‘low-productivity’ community, typical of subtropical gyres. If the California Current System were to permanently switch to a less productive state, this would have devastating consequences for marine life in this vital ecosystem.

It is now apparent that even modest temperature rises can have a profound impact on marine ecosystems—disrupting complex oceanic cycles and radically altering the abundance and distribution of marine organisms. Climate change is likely to adversely affect numerous seabird populations, exacerbating the already considerable threats posed by overfishing, bycatch and associated habitat destruction.