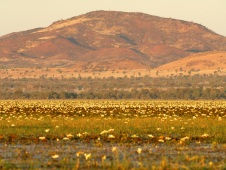 Many societies rely on the ecosystem services provided by freshwater wetlands. BirdLife is working with local communities around the world to safeguard these vital wetland habitats in the face of ongoing climate change. Two examples from Nepal and Burkina Faso are presented here.

Healthy wetlands can greatly increase our resilience to climate change impacts such as storms, floods or droughts. Due to their ability to store and slowly release water, wetlands can also be a vital lifeline in periods of extreme drought. Unfortunately, freshwater wetlands are being lost and degraded faster than any other ecosystem type.

Unusual rainfall patterns have caused fluctuations in water levels, including a longer dry season, which has led to water bodies drying up. This has resulted in the loss of wetland habitat and of the natural resource base (fish, molluscs and water for crops) that sustains many of the area’s poorest people. Invasive plant species have also thrived in the drier conditions, resulting in further loss of biodiversity. The wetland reed Typha (used for mat weaving and fuel) has decreased due to the intense drying out of wetlands. The response has been to use manure as an alternative fuel source, meaning that it is no longer available as a crop fertiliser.

Working with local communities, Bird Conservation Nepal (BirdLife in Nepal) has successfully implemented a project integrating biodiversity conservation with livelihoods, also helping to build resilience to the impacts of climate change. Activities include promotion of biofuel production (briquettes made from wetland invaders such as Iponea and Laneria) and fertiliser production from the invasive water hyacinth Eichhornia. Clearing invasive plants to use in these products helps maintain and strengthen the wetland ecosystem. Community mobilisation and training has created new opportunities for indigenous people, while promoting the transfer of local knowledge from one community group to another.

Lake Oursi-Lake Darkoye IBA and Ramsar site in the north of Burkina Faso is of considerable conservation value. It supports more than 200 bird species, including 106 waterbird species and five species found only in the Sahel biome. It also supports the Vulnerable red-fronted gazelle Gazella rufifrons and cheetah Acinonyx jubatus. More than 17,500 people also live in the area around the lakes.The 12 communities in the IBA rely mostly on ecosystem services for their livelihoods, which include farming, livestock grazing and fishing.

Climate change is predicted to convert much of the area into an arid zone. Many biological resources will suffer, with potentially serious consequences for social cohesion in the region. NATURAMA (BirdLife in Burkina Faso) is working with local people to ensure that water conservation mechanisms are in place, such as ditches, small dams and small lakes (boulis) for water collection, with tree planting for improved filtration during the rainy season. Techniques for ‘wise use’ of water, especially in relation to agroforestry, are also being promoted.