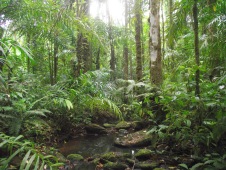 The São Tomé lowland forests IBA holds three species that are Critically Endangered and seven more that are either Endangered or Vulnerable—all are endemic to the island of São Tomé. The IBA is threatened by industrial-scale plantations and hydroelectric dam building as well as illegal hunting. Strengthening local capacities, working with the private sector to improve the sustainability of business practices, and research are all urgently needed actions.

São Tomé & Príncipe is an island nation off the west coast of Africa with an exceptionally number of endemic species, many of which are also globally threatened. The forests of these islands were recently identified as some of the most important in the world for the conservation of the planet’s forest birds. One of the IBAs identified there is São Tomé lowland forests, which holds key populations of no less than three Critically Endangered species: Dwarf Olive Ibis Bostrychia bocagei, São Tomé Fiscal Lanius newtoni and São Tomé Grosbeak Neospiza concolor. There are also seven further Endangered and Vulnerable bird species. Nearly all of the most important forests, supporting the endemic biodiversity of the country, are encompassed by the globally important Obô Natural Park.

The forests in the buffer zone of the Park, which are intended to be development-free areas, are now threatened by a range of new developments, including plans for industrial-scale oil palm plantations and a hydroelectric dam. There is also a lack of capacity and resources for the management of the protected area. The threatened birds, particularly the Ibis, are directly affected by illegal hunting. Lack of data about the precise distribution and abundance of the threatened species hinders the identification of priority sites and the implementation of targeted conservation actions.

Actions that are urgently needed include research, the implementation of biological monitoring programmes, an increase in the capacity of protected area staff and discussions with developers about how to minimize pressures and impacts on the remaining forests in the buffer zone of the Park. As São Tomé & Príncipe currently lack a BirdLife Partner, supporting local NGO development is also an important priority.