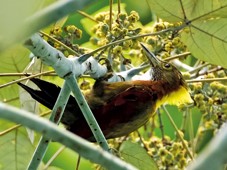 Many montane species are shifting their ranges upslope to track suitable climate, but with large variation in responses across studies. Variation amongst studies is likely explained by site specific and species specific responses, spatial variation in climate change, time delays in species responses, and the importance of considering both temperature and precipitation.

Percentage of species shifting their distributions to higher or lower altitudes

Many montane species are shifting their ranges, but altitudinal responses to climate change are more varied than latitudinal, with responses ranging from upward or downward shifts, to no shifts at all. In North America, 88% of species exhibited upward shifts (Auer and King 2014) compared to only 9% of species in the French Alps (Archaux 2004). Similarly, a study in New Guinea found just 5% of species to experience no change in altitude during the study (Freeman and Freeman 2014), whilst in France 76% of species experienced no change (Archaux 2004). Variation amongst studies is likely explained by site specific and species specific responses, spatial variation in climate change, time delays in species responses, and the importance of considering multiple climatic variables.

In Sierra Nevada, 82% of range shifts could be explained by changes in either temperature or precipitation. Low elevation birds were most likely to shift their altitudinal range in response to changes in precipitation, whilst high elevations irds were most likely to shift in response to temperature changes. Of 53 species that were studied across multiple sites, 11 species shifted in opposing directions at different sites. Species with small clutches, high territoriality, resident or short migratory status and dietary specialists were more likely to shift their altitudinal range (Tingley et al. 2012).

Climate change is shifting ranges with likely knock-on effects for species interactions and ecosystem functions. Interactions with habitat loss worsen the story; ranges tracking suitable climate may be shifting into unsuitable habitat, especially in the tropics where deforestation levels are high.