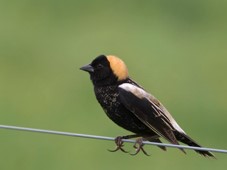 The Southern Cone Grasslands Alliance have identified priority sites for conservation action based on the monitoring of five critical species breeding in North America and wintering in South America’s pampas grasslands. This preliminary research highlights the need for further field surveys and consultations with local experts to better understand the importance of these grassland IBAs for migratory birds.

The Southern Cone Grasslands Alliance—a BirdLife initiative lead by partners Aves Argentina, Aves Uruguay, SAVE Brasil and Guyra Paraguay—have identified priority Important Bird and Biodiversity Areas (IBAs) based on monitoring of the five most critical species breeding in North America and wintering in South America’s pampas grasslands. Conservation of these areas would benefit millions of Northern and Southern Hemisphere birds. Before now, no evaluation of the importance of the Southern Cone grasslands for migratory species had been carried out and neither had there been any estimations of population trends or threats to these birds.

Out of the 43 migratory species that have populations concentrated in the Southern Cone grasslands, the five species of highest conservation concern were selected by comparing the ecological characteristics of different groups of migratory species that inhabit the wide range of grasslands. The five species are: Buff-breasted Sandpiper Tryngites subruficollis, Upland Sandpiper Bartramia longicauda, American Golden Plover Pluvialis dominica, Bobolink Dolichonyx oryzivorus and Swainson’s Hawk Buteo swainsoni.

Information was then compiled on the 134 IBAs in the region where grassland birds occur. A preliminary list was drawn up of high priority IBAs for migratory grassland birds by comparing the presence and abundance of these five species in each IBA. There are 61 IBAs with records of these migratory birds and 20 of these were considered as high priority for conservation. Only 26 of these 61 IBAs have any degree of protection.

The distribution of migratory birds in the IBAs is very uneven and there is only one IBA where all five species occur: San Javier, in Santa Fe, Argentina. There are 12 IBAs that have records of up to three of these migratory species. The geographic distribution pattern of the species in the IBAs was studied and three large natural regions were detected that would be key for setting up a network of protected areas or legally defined IBAs, in order to conserve these populations of migrants on a regional scale:

• The Atlantic Coast, for its importance for the overwintering of Buff-breasted Sandpiper and American Golden Plover.

• The floodplains of the Paraguay and Paraná rivers, which are important as an overwintering site for the Bobolink in particular and for the north-south movements of migratory birds in general.

• The interior of the Pampas, for its importance for congregations of Swainson’s Hawk and Upland Sandpiper. Through this preliminary research, the Alliance is concerned about the lack of information on grassland IBAs and the presence of migratory birds from the Northern Hemisphere. A series of field surveys and additional consultations with local experts would significantly increase the available knowledge of these sites. Progress could then be made in the design of conservation schemes that would complement initiatives that are being undertaken in the Northern Hemisphere.

Di Giacomo, A. S. and Prera, A. F. (2008) 20 high priority areas for the conservation of Nearctic migratory birds in the Southern Cone grasslands of South America. Report by Southern Cone Grasslands Alliance.