Reducing the impacts of power lines on birds 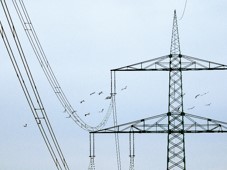 Scaling up renewable energy requires new infrastructure such as power lines. Depending on their design and routing, these can create electrocution and collision risks to certain bird species. BirdLife International is helping prevent bird electrocutions, working with medium voltage grid operators to replace or insulate dangerous infrastructure. With the Renewables Grid Initiative, BirdLife works with high voltage grid operators in Europe to develop and implement better practices to reduce bird collisions and other environmental impacts.

Avian mortality due to collisions with power lines and electrocution can be high (Jenkins et al. 2010, Bevanger 1998). Power line construction can also influence species through changes in habitat such as tree clearance. Electrocution is only a risk in low and medium voltage networks. BirdLife has worked with grid operators in these networks for decades in countries such as Hungary, Bulgaria and the Sudan to identify dangerous support poles and have them replaced or insulated.

To combat climate change, a large shift towards renewable energy will be necessary, which will result in a large demand for further energy infrastructure including high voltage transmission lines. In Germany alone, 3,600km additional transmission lines will need to be built over the next ten years to meet the energy demands of the country (Grid development plan 2013). To ensure power grid expansion is not detrimental to wildlife, collaboration between environmental organisations and industry partners will be vital.

When new pylons are introduced into a landscape, tall trees in a corridor 50-70m wide are removed, resulting in changed habitats that should be considered in the planning stage. In biodiverse ancient woodland, this deforestation will likely have negative impacts, whilst the same habitat changes through a monoculture landscape may allow the colonization of new species resulting in increased biodiversity. In Massachusetts, powerline corridors of certain width and quality are utilized as breeding habitat for scrub-shrub bird species of conservation concern (King et al. 2009, Askins et al. 2012), while ground nesting birds in coastal grazing marshes in the UK were less likely to be found near power lines (Milsom et al. 2000). Decisions need to therefore be made in the context of the habitat in which the infrastructure will be present, as the effects are highly context dependent.

Recommended Citation:
BirdLife International (2015) Reducing the impacts of power lines on birds. Downloaded from http://www.birdlife.org on 20/05/2022