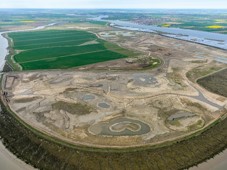 Storm-surges and sea level rise threaten coastal defences. The RSPB (BirdLife in the UK) is partnering with government and engineers to move defences inland and create coastal wetlands as a buffer. At Medmerry, new wetland is reducing flood risk to 348 homes, while at Wallasea Island, 670 ha of newly created wetlands is reducing flood risk and providing habitat for waterbirds.

Rising sea levels are well recognised as an impending threat to coastal ecosystems (Galbraith et al. 2002, Baker et al. 2006) and estimates predict sea levels to rise by up to 1m by 2100, and by over 5m by 2500, depending on gas emissions, ice melt and thermal expansion observed (Jevrejeva et al. 2012). Storm-surges and sea level rise threaten coastal defences, and are likely to continue to do so through the coming century.

Ecosystem-based adaptation approaches benefit both nature and people and include the use of coastal wetlands to act as buffers to inland hard defenses. Two such managed realignment projects have been put in place in the UK, both led by the RSPB (BirdLife in the UK). In Medmerry, the Environment Agency and the RSPB led on the creation of 7km of high ground flood embankment that enabled the existing defense to be flooded, creating 183 hectares of mudflat, saltmarsh and transitional grassland, as well as protection for a further 360 homes in Selsey (RSPB 2015).

In Essex, the RSPB Island Wild coast Project called Wallasea has created 670 hectares of coastal wetland, creating habitat for a range of breeding wetland birds. Due to the low lying nature of the island, excavated soil was used to heighten the area, allowing a range of habitats to be designed including saline lagoons, islands, mudflats and transitional grasslands. Shingle, sand and cockle islands have been created for nesting terns and Common Ringed Plovers Charadrius hiaticula, whilst large willow islands have been created in the hope of attracting breeding Eurasian Spoonbills Platalea leucorodia. Saline lagoons have been designed to have varying depths to encourage important prey for wetland birds, whilst brackish pools have been designed to encourage breeding Black-winged Stilts Himantopus himantopus (Ausden et al. 2015).

Sea level rises are expected to result in the loss of intertidal habitat and the creation of intertidal buffers is an effective way in which both people and wildlife can benefit from this change.