Rat removal for the benefit of endangered island-dwelling birds 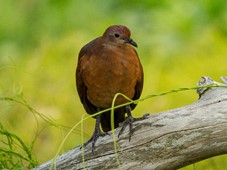 Invasive alien species negatively impact over one third of all threatened bird species, with island dwelling birds being especially vulnerable. Through a huge collaborative effort between BirdLife Partners, other NGOs, local community members, businesses and the French Polynesian government, the removal of rats from islands in the Acteon & Gambier archipelagos is hoped to be successful in improving conditions for native fauna such as the critically endangered Polynesian ground-dove.

A huge collaborative effort between BirdLife International, Société d'Ornithologie de Polynésie (SOP Manu - BirdLife in French Polynesia) and Island Conservation aimed to provide this necessary conservation action, and has resulted in the removal of rats from six remote islands in the Acteon & Gambier archipelagos and the doubling of safe habitat for the Critically Endangered Polynesian ground dove. Further surveys in the next year will determine the success of the IAS removal.

The success of the project so far is owed to the collaborative nature of the operation and impressive logistical commitment of 31 personnel from three continents and six countries. Locals helped plan and support the implementation of the project, local organisations and businesses provided essential services and the French Polynesian government provided some essential funds.

Saving the birds of the Pacific