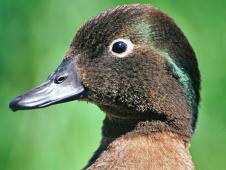 By the beginning of the 21st Century, Campbell Island off New Zealand was home to an estimated 200,000 Norway Rats—perhaps the densest population anywhere in the world. The introduced rodent had devastated native wildlife and pushed the endemic Campbell Islands Teal to the brink of extinction. The species only persisted on the tiny offshore islet of Dent, which had luckily remained rat-free. However, following a rat eradication programme and captive breeding project, Campbell Islands Teal has been successfully restored to the island and, in 2011, was downlisted from ‘Critically Endangered’ to ‘Endangered’ on the IUCN Red List of threatened species.

Campbell Island (c.113 km2) and its satellite islets lie 700 km south of the New Zealand mainland. The island and its outliers have a remarkably rich plant life and are an important home for seabirds, including six species of globally threatened albatross such as Campbell Albatross Thalassarche impavida and Southern Royal Albatross Diomedea epomophora. They are also home to the endemic Campbell Island Shag Phalacrocorax campbelli and the flightless Campbell Islands Teal Anas nesiotis, one of the world’s rarest ducks. Campbell Island is designated as an Important Bird Area (IBA) and forms part of the New Zealand Sub-Antarctic Islands World Heritage Site.

Unfortunately, since its discovery in 1810, Campbell Island’s flora and fauna have been under threat from introduced mammals. Human settlers brought with them feral sheep Ovis aries and cattle Bos taurus, which destroyed the indigenous vegetation, and feral cats Felis catus and Norway rats Rattus norvegicus, which preyed on native birds. Several bird species became confined to the tiny offshore islets that remained rat-free. Campbell Islands Teal became restricted to Dent Island—a 23 ha islet lying 1.6 km west of the main island. In 1990, a survey estimated the population at just 60–100 birds (Goudswaard 1991) and, by 1998, it is likely that no more than 25 breeding pairs remained (Gummer and Williams 1999). In 2000, the species was added to the IUCN Red List of threatened species as ‘Critically Endangered’.

Restoration of the island began in 1970. Over the following 20 years, the feral sheep and cattle were removed and, as the island’s vegetation recovered and became denser, the feral cats naturally died out (McClelland 2011). However, the size, topography and remoteness of Campbell Island meant that many people doubted whether rats could ever be completely eradicated. Despite these reservations, in 2001 the New Zealand Department of Conservation (DOC) began an operation to do just that. In just one month, four helicopters were able to transport and spread 120 tonnes of rodenticide-laced bait across the island. Since this time, repeated monitoring expeditions have found no signs of rats (McClelland 2011). Following the rat eradication, the local subspecies of Australasian Pipit Anthus novaeseelandiae aucklandicus and New Zealand Snipe Coenocorypha aucklandica perseverance have naturally recolonised Campbell from the surrounding islets, and Grey-backed Storm-petrel Garrodia nereis and White-chinned Petrel Procellaria aequinoctialis have both been recorded breeding on the island for the first time (Barker et al. 2005, Thompson et al. 2005, McClelland 2011). The successful operation has established a template for rat eradication that has been used around the world.

Concurrent with the restoration of Campbell Island, a captive breeding programme for the Campbell Islands Teal was established in readiness for the day when they could be reintroduced. Eleven birds were captured on Dent and transferred to the Mount Bruce National Wildlife Centre on New Zealand’s North Island, where successful breeding began in 1994 (McClelland and Gummer 2006). In 1999, a temporary ‘wild’ population was released on Codfish Island (off South Island) to provide a source of birds for the reintroduction programme and to act as an 'insurance' population, in case something happened to the birds on Dent.

In September 2004, with Campbell deemed rat-free, 22 teal from the free-ranging population on Codfish and 28 captive bred birds were successfully transported to Campbell Island. The following year, a further 55 birds were released—33 captive bred and 22 from Codfish (McClelland and Gummer 2006). The success of the translocation was confirmed in 2006 when breeding took place for the first time. A survey carried out in 2008 established that the population had climbed to over 200 individuals and, in 2011, the species’ Red List status was downlisted to ‘Endangered’.

Recommended Citation:
BirdLife International (2012) Rat eradication and captive breeding have helped save the Campbell Islands Teal from extinction. Downloaded from http://www.birdlife.org on 27/09/2022