Raptors in Botswana are faring poorly outside protected areas 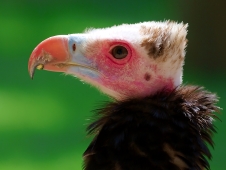 A survey of raptor distribution in Botswana’s subtropical woodlands during 1991–1995 found a notable decline in raptor abundance with increasing distance from protected areas. This seems mainly as a result of structural changes to the vegetation (and resulting loss of potential prey) caused by livestock grazing.

Abundance of raptors in relation to distance from protected areas

The large wilderness areas in Botswana are one of the strongholds for raptors in southern Africa. Nevertheless, outside protected areas, many raptor species still have an unfavourable conservation status (Herremans 1998). A survey of raptor distribution in the country’s subtropical woodlands during 1991–1995 found a notable decline in raptor abundance with increasing distance from protected areas, especially during the dry season (Herremans and Herremans-Tonnoeyr 2000). The analysis was based on 9,964 records of diurnal raptors of over 40 species. Large (>2 kg), non-migratory eagle species showed the most marked reductions in numbers away from protected areas, but similar (though less extreme) patterns were also observed among various species of smaller raptors (e.g. kites, sparrowhawks, kestrels). For certain species, there was also a clear ‘edge effect’ within protected areas, with the abundance of large eagle species almost 45% lower in the peripheral zone (within 30 km of the boundary) than in the core (Herremans and Herremans-Tonnoeyr 2000).

The poor conservation status of raptors in Botswana seems mainly due to widespread depletion of biomass and biodiversity (including potential prey), as a result of structural changes to the vegetation caused by livestock grazing (Herremans 1998, Herremans-Tonnoeyr 2000). The relative scarcity of woodland raptors outside protected areas is even more acute in more densely populated regions of southern Africa, with agricultural practices also implicated in these declines (Harrison et al. 1997).