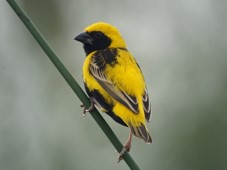 Tanzanian savannah birds are disproportionally colonising zones with higher climatic suitability and a higher proportion of protected habitat. Wetland birds that have colonised the UK in recent years show a similar pattern, with preferential breeding in protected areas. Current protected area networks are therefore critical in helping species to adapt to climate change. 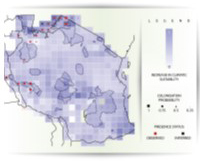 Climate change has altered the distribution of numerous species over the past century (Zuckerberg et al. 2009, Auer and King 2014, Environmental Protection Agency 2014, Virkkala and Lehikoinen 2014, Gillings et al. 2015), and by the end of this century species turnover in conservation networks in expected to be high (Hole et al. 2009, Bagchi et al. 2013). Despite these shifts, climatic suitability is thought to be retained in protected areas more than unprotected in Europe (Araújo et al. 2011) and previously unprotected species are likely to shift into protected areas, resulting in sites of largely changed community compositions, but of still high biodiversity value (Bagchi et al. 2013, Hole et al. 2009).

Using Tanzanian bird atlas data, the importance of climatic suitability and protected area status was determined between 1960-1989 and 2000-2006 by examining the probability of extinction, persistence or colonisation of grid cells (Beale et al. 2013).

Newly colonised cells had improved climatic suitability, and cells preferentially colonised had a higher proportion of protected area than those that remained absent throughout the time period. Local extinction of savannah birds appears not yet to be associated with climate change, as cells losing species were not associated with decreased climatic suitability, but more the level of land degradation.

Wetland birds that have colonised the UK in recent years show a similar pattern (Hiley et al. 2013), with all six species colonising since 1960 and establishing permanent breeding populations doing so primarily in protected areas, compared to non-colonisers that show no overall trend. This bias however decreased over time for five species as breeding ranges expanded into the wider landscape. This disassociation has occurred across different time scales, with the percentage of Cetti’s warbler Cettia cetti breeding in protected areas declining since the 1975, compared to 2006-2008 for the common crane Grus grus.

Recommended Citation:
BirdLife International (2015) Protected areas are helping species to persist within their ranges and to colonise new areas. Downloaded from http://www.birdlife.org on 18/05/2022