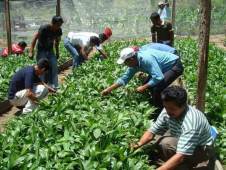 BirdLife Partners across the world have encouraged sustainable harvesting of non-timber forest products as an alternative to logging. In the state of Chiapas, Mexico, however, the regional branch of BirdLife Partner Pronatura backed local communities in their opposition to a state-wide logging ban, after working with them to ensure that their forestry practices are sustainable and well-managed.

Mexico’s protected areas often include human settlements, with a great diversity of cultures and traditions of land management and natural resource use. The people who use these ecosystems also play an important part in maintaining them. As a consequence, Pronatura (BirdLife’s Mexican affiliate) and its six regional organisations have established eight IBA-Local Conservation Groups (LCGs), with three more being developed.

In Mexico, many biodiversity-rich lands are in the hands of rural communities and ejidos (the communally-held lands of a village, with a traditional system of use rights and tenure). The Tierra y Libertad ejido is part of the buffer zone of the La Sepultura Biosphere Reserve IBA, in the Sierra Madre de Chiapas. In the late 1990s, the ejido assembly applied to the Ministry of Environment and Natural Resources (SEMARNAP) for a license to carry out logging in the pine-oak forest. A ten-year license was granted, but suspended after only one year when checks by SEMARNAP revealed ’irregularities’ in compliance. Despite this setback, groups of ejidatarios who were determined to find a way of continuing to use the community-owned forests came up with a system of self-regulation. Developed with the support of Pronatura Sur, this enabled Tierra y Libertad to get a new license for forest use.

Working with the directors of the Biosphere Reserve, Pronatura Sur and the community produced a plan for low-impact logging in areas of high biodiversity and ecological value, based on recreating the natural system of ecological disturbance and resilience by logging selected patches of trees. Systematic monitoring of harvestable trees in harvesting areas helps select the appropriate patches, in order to reduce the impacts as well as the costs of logging. Management activities then prevent soil erosion and ensure the maintenance of natural diversity in the trees’ regeneration. This was the first time that this system, which was originally developed for the tropical forests of the Yucatan Peninsula, had been implemented in temperate forests.

A community-run technical office is being set up at Tierra y Libertad in order to integrate the management of timber extraction, cultivation of and Fair Trade in the much-prized palma camador (an endemic Chamaedorea “parlour palm”) and production of organic shade-grown coffee. Pronatura Sur participates in meetings of the ejido’s advisory council, where they have noted the high level of commitment to the protection of the watershed and ecosystem services, informed by the experience people have acquired during the various projects. Pronatura Sur is working with similar systems in five other ejidos in Chiapas state, and is aiming to set up the Tierra y Libertad forest management system as a standard for all management plans in IBAs and Natural Protected Areas.

In 2009, Pronatura Sur supported the emergence of a state-wide movement of forest users, including 42 ejidos and some private landowners. This movement was able to defeat a proposed ban on logging in the state of Chiapas, by proving that the forestry practiced by the ejidos is sustainable and technically well-managed.