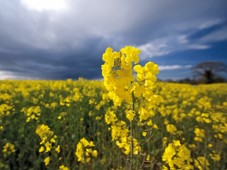 Policy in Europe intended to tackle climate change has led to a large increase in the use of biofuels, with direct and indirect impacts on natural habitats across the continent. BirdLife Europe is raising awareness of these issues and has secured a revision in the EU biofuel legislation.

Europe’s policies intended to tackle climate change have led to a strong push for the use of biofuels in transportation. These biofuels have to a large extent been made of agricultural crops, contributing to direct and indirect clearing of natural habitats and rising greenhouse gas emissions from direct and indirect land use change (Searchinger et al. 2008, Melillo et al. 2009, Gibbs et al. 2008). It is predicted that an extra 313 to 646 million tonnes of carbon dioxide equivalent will be emitted between 2011 and 2020 in Europe due to increased biofuel use (IEEP 2011). Birdlife Europe has done persistent advocacy work to raise public awareness of these issues and to advocate for stronger safeguards for biofuels (and other bioenergy).

BirdLife’s work has progressively changed the public image of biofuels and made indirect land use change (ILUC) an issue that EU policy-makers could not ignore. Through a combination of original research, policy analysis, outreach, media work, engagement with more progressive parts of the industry and capacity-building within the NGO community, BirdLife Europe played a key role in securing a revision of EU’s biofuel legislation. The new legislation approved in spring 2015 recognizes the ILUC impacts and limits the share of food based biofuels to 7% in the energy consumption in transport. Indirect emissions—resulting from agricultural expansion to meet the biofuel demand—must now be reported, sending a strong message that reductions must be made. It’s a first of a kind legal review of biofuels in the world, setting an example for future bioenergy policies.