Powerlines have a detrimental impact on Bonelli’s Eagle in Spain 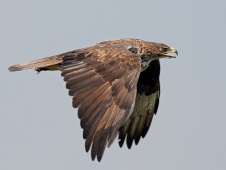 Powerline collisions have the potential to affect local populations of raptors. For example, in northern Spain, collision with powerlines was the third biggest factor in non-natural mortality of Bonelli’s Eagle. Mitigation measures are urgently required to reduce the negative impact of powerlines on birds of prey.

Raptors are generally considered less susceptible to collisions with overhead wires than many other species of soaring birds because of their superior vision and ability to manoeuvre in flight, as well as their solitary habits and low population densities. While the number of collision accidents involving raptors may be low, the impact on declining species is potentially high.

Bonelli's Eagle Hieraaetus fasciatus is a species of Least Concern (LC) according to the IUCN Red List, but its population is decreasing globally. The population decline in Europe has been mainly attributed to high levels of human-related mortality.  Depending on the region, powerlines have been reported as responsible for 8–100% of the deaths of breeding eagles (Real and Maňosa 1997).

A seven year study (Maňosa and Real 2001) evaluated the potential negative effects of collisions with transmission lines on a breeding population of Bonelli's Eagles in Catalonia, Spain. The study was carried out in the coastal mountain ranges of Catalonia, north-eastern Spain, where an estimated 70 Bonelli's Eagle pairs, approximately 10% of the European breeding population, reside.

During the study, a total of 502 individuals were monitored in 47 nesting territories, and a minimum of 44 changes in breeding individuals, or turnovers of adults, at 27 nesting territories were observed. At three of these territories, where 36 individuals had been monitored and seven changes observed, three dead eagles were found. Of the 12 eagles found dead, collision with transmission lines was the cause of death of two (17%), six (50%) died by electrocution, three (25%) were shot, and one died of unknown causes. Both eagles that collided with transmission lines were male.

The authors also concluded that turnover rates were related to the amount and proximity of high-collision risk transmission lines, but not the total length of transmission lines within the territory, indicating that turnover was the result of a direct collision danger to eagles rather than to reduced habitat quality or higher interferences in areas crossed by powerlines.

Recommendations from the study included that new transmission lines should be constructed so that they avoid crossing <1 km of an eagle territory and that all existing transmission lines within a radius of 5 km of a Bonelli's Eagle nesting territory should be carefully checked, evaluated for risk, and adequately marked if they interfere with flight paths of breeding eagles. Site-specific monitoring was also emphasised as being a vital component to ensure that mitigation actions lead to a reduction in mortality risk.

Recommended Citation:
BirdLife International (2013) Powerlines have a detrimental impact on Bonelli’s Eagle in Spain. Downloaded from http://www.birdlife.org on 16/02/2020