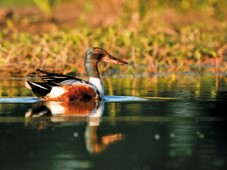 Waterbird declines in the Oosterschelde/Krammer-Volkerak delta region of the Netherlands are associated with the level of habitat loss caused by the construction of storm surge barriers and dams—infrastructure that is likely to increase in frequency with climate change. In the same region, low survival of Eurasian Oystercatchers Haematopus ostralegus in severe winters is more pronounced in areas where coastal engineering has caused habitat loss.

Percentage change in winter waterbird abundance before and after construction of storm-surge barriers. [Excludes the outlier, Great Cormorant Phalacrocorax carboas, which increased by 639%].

The introduction of coastal infrastructure is a driver of biodiversity change (Bulleri and Chapman 2010) and poorly planned infrastructure in response to coastal flooding has been shown to have negative impacts for waterbirds (Schekkerman et al. 1994, Duriez et al. 2009). Effective planning is therefore crucial, especially since rising sea levels is likely to result in increased coastal management by the end of the century (Nicholls 2004).

In the Oosterschelde/Krammer-Volkerak delta region in the Southwest of the Netherlands, a storm surge barrier and two secondary dams were constructed between 1982 and 1986. In the Oosterschelde region alone, 17% of the tidal mudflats were lost. Bird counts were conducted pre- and post-construction to enable the impact of the works on population trends to be determined (Schekkerman et al. 1994).

Whilst some birds appear to have benefitted, more than twice as many have undergone local population declines. In January, the number of waders found in the region decreased by 31% coared to pre-construction. Population trends for the construction region were shown to be largely worse than national trends, with thirteen species doing worse, and only four doing better (Schekkerman et al. 1994).

For Eurasian Oystercatchers Haematopus ostralegus, decreased survival and increased emigration was seen post construction compared to pre- construction, but only when comparing intact habitat to changed habitat during severe winters (Duriez et al. 2009). Birds from intact sites showed increased site fidelity, compared to those from sites most impacted by habitat loss, which had increased movement away.

Construction projects in ecological sensitive areas must be planned with wildlife in mind to minimise the impact of human climate change adaptation, as the magnitude of habitat change is likely to increase in the coming decades as humans respond to a changing climate.