Politics, fire and threatened birds in the Murray-Sunset, Hattah and Annuello IBA 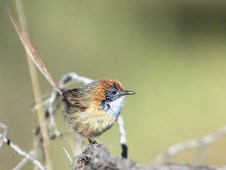 Four IBAs in the Murray Mallee of south-eastern Australia support threatened, specialist mallee birds. Recent large-scale wildfires in two of these IBAs have destroyed vast areas of habitat and increased the extinction risk for a number of threatened mallee birds. This risk is being exacerbated by political pressure for government agencies to carry out planned burning in the Murray Sunset, Hattah and Annuello IBA.

The semi-arid Murray Mallee of south-eastern Australia provides crucial habitat for a number of globally threatened mallee birds: Malleefowl Leipoa ocellata (Vulnerable), Black-eared Miner Manorina melanotis (Endangered), Mallee Emuwren Stipiturus mallee (Endangered) and Red-lored Whistler Pachycephala rufogularis (Vulnerable), as well as two sub-species that are listed as nationally Vulnerable, Western Whipbird Psophodes nigrogularis (eastern) and Regent Parrot Polytelis anthopeplus (eastern). Most of these species are dependent on mallee habitat that hasn’t been burnt for fifteen years or more. Four large mallee IBAs were designated for their value to some or all of these species: Billiatt; Riverland Mallee; Wyperfeld, Big Desert and Ngarkat; and Murray Sunset, Hattah and Annuello.

Extensive land clearance in the past has left the remaining mallee highly fragmented, and its bird species much more susceptible to fire events due to their restricted range sizes and inability to recolonize isolated fragments.Inappropriate fire regimes, in particular the risk of large-scale, reserve-wide fires, pose the most significant threat to threatened mallee birds.

Inappropriate fire regimes may arise from unplanned fires (e.g. as a result of lightning strikes or escaped campfires) or planned burns conducted as part of a fire risk management program.

Large wildfires have occurred in each of the four mallee IBAs in the last decade. Fires in Ngarkat Conservation Park (CP) have resulted in the loss of all Mallee Emu-wren habitat from this former stronghold of the species. An extensive fire in Billiatt CP in 2014 means that the global population of Mallee Emu-wren is now confined to one IBA, which is comprised of two largely contiguous National Parks in the State of Victoria: Murray Sunset and Hattah. The species is highly vulnerable to the impacts of wildfires and planned burning.

In 2010, the Victorian Government introduced a policy of conducting planned burning on 5 percent of public land each year. The policy represents a significant extinction risk for most threatened mallee birds. In the semi-arid mallee landscape, vegetation recovers very slowly after fire and cannot be re-burnt for 15-20 years. Modeling indicates that, if this policy continues, in less than 20 years all mallee vegetation will be less than 20 years old, leaving little or no habitat for threatened mallee birds (Taylor et al 2013).

As Mallee Emuwren is only found in Victoria, the policy may lead to the species extinction. To date, government agencies have avoided burning habitat known to support Mallee Emuwren by undertaking burns in strategic fuel breaks that will reduce the risk of reserve-wide fire.

BirdLife Australia has been advocating for the protection of long unburnt mallee habitat. In 2014, BirdLife Australia hosted an Emergency Summit in response the crisis facing threatened mallee birds and has since engaged experts and representatives from universities, State and Federal government agencies in the development of a Conservation Action Plan based on the Open Standards for the Practice of Conservation.

Burnoff policies could be damaging habitats for 100 years

Recommended Citation:
BirdLife International (2014) Politics, fire and threatened birds in the Murray-Sunset, Hattah and Annuello IBA. Downloaded from http://www.birdlife.org on 28/06/2022