Pesticides continue to poison birds on a large scale 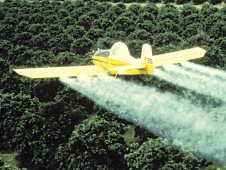 Pesticides assist in food production, habitat management and the control of diseases and pests, but they can also have significant environmental impacts. There are many examples of globally threatened birds being killed, but the longer-term and indirect effects of pesticide use are little studied.

Worldwide, more than two million tonnes of pesticides are applied annually and usage continues to increase. Pesticides are valuable tools assisting in food production, habitat management and the control of diseases and pests, but they also have significant environmental impacts. According to one conservative estimate, 672 million birds in the USA are directly exposed each year to pesticides on farmland, and 10% of these birds die as a result (Williams 1997). As is probably the case in most countries, there is no centralised database in the USA to collect the information on bird kills attributed to pesticides. Such incidents are difficult to detect, and monitoring efforts are generally lacking. The longer-term and indirect effects of pesticide use are even less well monitored or studied. Nevertheless, approximately 50 pesticides used currently in the USA are known to have caused die-offs of birds, including such diverse groups as songbirds, gamebirds, raptors, seabirds and shorebirds, according to the US Fish & Wildlife Service.

For instance, monocrotophos is an organophosphate insecticide used in crop farming, and one of the most bird-toxic agricultural chemicals in use. Since its introduction in 1964, documented avian mortalities number well over 100,000, including the mass-poisoning of nearly 6,000 Swainson’s Hawk Buteo swainsoni in Argentina during 1995/96 (Goldstein et al. 1999). Despite this, it remains one of the most heavily used pesticides in the world. In November 2000, 15 Sarus Crane Grus antigone (Vulnerable) were found dead in a field near their wintering grounds in Keoladeo National Park, northern India (Pain et al. 2004). The cranes had died after eating recently sown wheat treated with monocrotophos. Such pesticide poisoning is known as a direct cause of mortality in many crane species (Meine and Archibald 1996).

Another poisoning incident occurred in Mongolia in 2002, when about 3,500 km² of steppe were treated with the rodenticide bromadiolone, following a population explosion of voles. No monitoring of non-target mortality was conducted, but ecologists working in the area noted more than 340 dead or dying birds at several localities, including 145 Demoiselle Crane Grus virgo and large raptors such as Steppe Eagle Aquila nipalensis and Saker Falcon Falco cherrug(Natsagdorj and Batbayar 2002). The true scale of the mortality was presumably much larger than was observed.

Unfortunately, intentional poisoning of birds with pesticides is a common practice in some parts of the world, e.g. where farmers are attempting to prevent crop damage or to control perceived predators of small livestock. In South Africa, this type of poisoning is one of the greatest threats to Blue Crane Grus paradisea (Barnes 2000) (Vulnerable), and in Europe numerous raptor species, including a number of globally threatened birds, are deliberately poisoned in this way (Mineau et al. 1999).