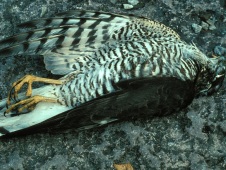 Persistent organic pollutants (POPs) are toxic substances composed of organic (carbon-based) chemical compounds. They include industrial chemicals like polychlorinated biphenyls (PCBs), residues of organochlorine pesticides like DDT, and unwanted byproducts such as dioxins. These pollutants persist in the environment and can travel through air and water far from their source. POPs tend to collect in the fatty tissue of organisms, and thus dramatically increase in concentration as they move up the food chain. POPs are now found almost everywhere, in our food, soil, air and water.

A growing body of evidence links POPs to reproductive failure, deformities and physiological and behavioural dysfunctions in wildlife. In the USA, studies from the heavily polluted Great Lakes region revealed that predators, including birds such as eagles and cormorants, suffered significant health impacts from POPs. These included various combinations of population decline and reproductive dysfunction, eggshell thinning, metabolic changes, deformities and birth defects, cancers, behavioural changes, abnormally functioning thyroids and other hormone system dysfunction, immune suppression, feminisation of males and masculinisation of females (Orris et al. 2000). Despite bans in an increasing number of countries, these chemicals are still much relied upon in medicine, industry and agriculture around the world. For instance, at Lake Kariba in Zimbabwe, African Fish-eagle Haliaeetus vocifer showed significant eggshell thinning and consequent breeding failure due to accumulation of DDT residues, following heavy spraying of this insecticide in adjacent woodland for the purpose of disease control (Douthwaite 1992).