People and biodiversity are often concentrated in the same areas 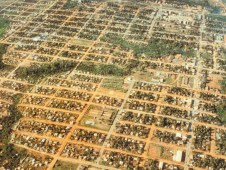 There is increasing evidence that areas of dense human settlement or impact coincide with areas of unique and irreplaceable biodiversity. One example is in the tropical Andes where the areas of densest human population largely overlap with centres of bird endemism. 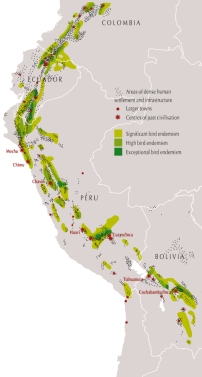 Demographic pressures—such as high densities or growth rates of human population, and increasing flows of migrants and refugees—are one of the main drivers of the extinction crisis. There is increasing evidence that areas of dense human settlement or impact coincide with areas of unique and irreplaceable biodiversity. In sub-Saharan Africa, human population density is positively correlated with species richness of terrestrial vertebrates, at least at the scale of a 1° grid (Balmford et al. 2001). This association holds for different groups such as widespread species, narrowly endemic species and globally threatened species, and looks set to persist in the face of foreseeable population growth. Many 1° grid cells with dense human populations also contain species found nowhere else, highlighting the potential for policy conflict between human development and biodiversity conservation. Similar relationships between the distributions of people and biodiversity have been found for Australia (Luck et al. 2004), North America (Luck et al. 2004), Europe (Araújo 2003) and, at a smaller scale, the tropical Andes (see figure) (Fjeldså and Rahbek 1998).

Recommended Citation:
BirdLife International (2004) People and biodiversity are often concentrated in the same areas. Downloaded from http://www.birdlife.org on 02/02/2023