Organised local citizens are a significant force for nature 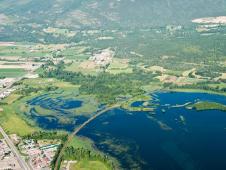 In Canada, a grassroots campaign, orchestrated by concerned local citizens, is fighting damaging proposals to build a shopping complex within the floodplain of the Salmon Arm Bay. The area is a crucial refuge for large numbers of birds, and the empirical evidence collected by campaigners clearly demonstrates that the development would substantially harm the ecological integrity of the site.

Salmon Arm Bay is the shallow estuary of the Salmon River on Shuswap Lake, British Columbia. In 1986, the Salmon Arm Bay Nature Enhancement Society (SABNES) was set up by local people, to assist the Wildlife Branch of the provincial government with the development and operation of their management plan for the Salmon Arm foreshore, as a Nature Conservancy and viewing area. Since then, SABNES and associated organisations like the Shuswap Naturalist Club have been working for the conservation and protection of Salmon Arm Bay.

The marshland of Salmon Arm Bay remains highly productive, even though residential and commercial growth in the area has increased. The bird life has actually grown in recent years, and 230 species have been recorded. This indicates that the bay has managed to remain healthy. More importantly, however, it reflects the fact that many of the wetlands have been destroyed in the southern interior and there are now fewer alternatives for the birds to use.

When it recently became apparent that the city council was determined to sanction an application for a SmartCentres shopping complex on 60 acres of land situated on the floodplain, in close proximity to the Salmon River delta, a coalition of organisations opposed to the plan—including the Shuswap Naturalist Club —was formed. The Shuswap Naturalist Club is a member of BC Nature, a federation of local natural history groups which represents 50 local nature clubs throughout British Columbia. BC Nature is, in turn, the regional partner of Nature Canada, one of the two BirdLife co-Partners in Canada.

The club felt strongly that the impact of four feet (1.2m) of fill and the runoff from nearly 2,000 parking spaces would trigger a rapid breakdown of the ecosystem, since it is the river that feeds the nutrients to the marsh. The coalition did what it could to educate the general public and bring pressure on the council to reconsider. A rally was held, pamphlets distributed and a press conference called. The council seemed not to be swayed. When five days of public hearings on the proposed amendment to the Official Community Plan began, more than 500 people filled the room at the Prestige Inn, with another 200 listening from the hallway. Presentations went on from 7 to 11 pm for three days, from 5:30 pm to 2:30 am another day, and came to an end at midnight on the last day. There were never fewer than 400 people in attendance on any evening. In all, 213 residents spoke, 191 in opposition and 22 in favor. The Shuswap Naturalist Club was very well represented at this 26-hour marathon; 17 members spoke about their environmental concerns, and a letter from BC Nature was read. At the end of this grueling process, three councillors voted against the OCP amendment, with two in favour and one abstaining. Many of the town citizens were elated that they had witnessed democracy in action, and the process left the public with a much greater appreciation of the value of the marshland.

However, the developers renewed their application, with strong support from within the city council and a rival citizen’s lobby in favour of the new shopping centre. Local volunteers set up the Wetland Alliance: The Ecological Response (WA:TER). Registered as a nonprofit society in 2009, WA:TER has spearheaded the science-based response to the development. They have so far produced four studies (two biological, one geomorphological, and a flood risk assessment) funded primarily by the citizens of Salmon Arm and the surrounding area, all of which have discredited the developer’s information. The flood risk assessment was directly responsible for convincing the Ministry of Environment (MoE) to order an independent study that eventually reduced the development from 60 to 22 acres. WA:TER is partnering with the Neskonlith Indian Band (NIB), whom they have assisted with information about the development, which will negatively affect their lands directly across the mouth of the Salmon River. As of July 2011, the city council has accepted the developer’s Environmentally Hazardous Area Development Permit Application. WA:TER has presented evidence that challenges the information on which this decision was based, which is once again being considered by the MoE; and the Neskonlith Indian Band has petitioned the Supreme Court of British Colombia for a judicial review of the decision.