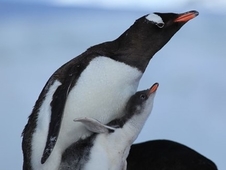 A team of scientists from seven countries have identified 63 marine Important Bird and Biodiversity Areas (IBAs) for four penguin species breeding in Antarctica. These are some of the most important areas for each of the species globally. Their results show that if the proposed network of Marine Protected Areas for Antarctic waters were implemented, the area of high-quality penguin habitat under permanent protection would increase by 49%–100%, depending on the species. Additionally, they found that krill fisheries are disproportionally targeting the important areas identified for penguin populations. Given that one of the key threats these birds face in Antarctic waters is competition with fisheries, the results support the need to designate the proposed MPA network, and offer additional guidance as to where decision-makers should act before further perturbation occurs in the Antarctic marine ecosystem.

Global targets for area-based conservation of species must consider not only the quantity of land or sea covered, but also the quality of sites, targeting those with greatest global significance for biodiversity (IPBES 2019, Visconti et al. 2019, Zhao et al. 2020). Wildlife in the Southern Ocean around Antarctica faces unprecedented threats from climate change and increasing extraction of marine living resources, therefore appropriate protection of key sites is vital (IPCC 2019, Rintoul et al. 2018, Chown & Brooks 2019, Hindell et al. 2020). To date, only two Marine Protected Areas (MPAs) have been designated in the waters surrounding mainland Antarctica and nearby islands. Several other MPAs have been proposed, however, despite an abundance of evidence supporting the MPA designs, CCAMLR (Commission for the Conservation of Antarctic Marine Living Resources–the body that governs the marine environment around Antarctica) members have not been able to reach consensus on the formal designation of these proposed MPAs. Indeed, two of the 26 members argue insufficient evidence has been provided.

Penguins are highly visible apex predators that use both land and sea. The status of their populations can reflect the state of the surrounding marine environment, and they are often regarded as indicator species (Furness & Camphuysen 1997, Boersma 2008). Therefore, identifying important marine areas for these birds can offer insight as to where conservation action may be beneficial for a range of species.

A group of scientists from seven countries collated data on penguins breeding in Antarctica to identify some of the most important marine areas for chick-rearing adults (Handley et al. 2021). They focused on four species–Adélie (Pygoscelis adeliae), Chinstrap (Pygoscelis antarcticus), Gentoo (Pygoscelis papua) and Emperor Penguins (Aptenodytes forsteri). Population estimates for each species were derived from published sources, and at-sea distributions were estimated using a new approach relying on published foraging range distances. These data were then used to identify Important Bird and Biodiversity Areas (IBAs) using a standardized and internationally agreed upon set of criteria. In total, 63 marine IBAs were identified, representing a network of globally important sites for the four species in Antarctica.

The researchers then looked at the overlap between the newly identified marine IBAs and the adopted and proposed MPA network. The currently adopted MPA network overlaps with between 0 to 30.7% of the species specific identified marine IBAs. With the adoption of the proposed MPAs however, the area of high-quality penguin habitat under permanent protection would increase by 49%–100%, depending on the species. They also found that a consistently disproportionate amount of krill was being harvested within the marine IBAs compared to the total operating area of the fishery. Given that krill is an important component of the diet of all four penguin species, these results reinforce the fact that krill fisheries may be directly competing with penguins for some of their primary prey sources.

The results of this study support the need to designate the proposed MPAs, and offer guidance as to where decision makers can act. Protection and appropriate management of the identified marine IBAs is likely to benefit a range of other taxa besides penguins, particularly other marine top predators such as seals, petrels and whales. Key to the management of these areas, particularly for the conservation of penguins, could be appropriately designated closures of fisheries operations for certain periods and in certain areas, with a regular review process.

How a new network of Marine Protected Areas would help penguins

CCAMLR (2019) Report of the Thirty-Eighth Meeting of the Commission. 188. Available at: https://www.ccamlr.org/en/ccamlr-38.