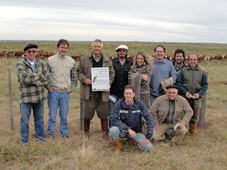 Farmers with local certificates © A Parera

The Southern Cone Grasslands Alliance is working with over 400 cattle ranchers across Uruguay, Argentina, Brazil and Paraguay to help safeguard grasslands. To evaluate the contribution of each farm towards conservation of the regional grassland ecosystem, the Alliance have developed a statistical tool called the Grasslands Conservation Index (GCI). The aim is to utilise this information to help governments develop incentives for cattle ranchers contributing to conservation efforts.

The grassland biome of southern South America is important for both carbon sequestration and avian diversity, but is under threat due to agricultural intensification (Scurlock and Hall 1998, Di Giacomo and Krapovickas 2005, Overbeck et al. 2007).  The Southern Cone Grasslands Alliance—a BirdLife initiative led by partners in Uruguay, Argentina, Brazil and Paraguay—promotes sustainable farming, with the aim of enabling high meat production and biodiversity conservation.

The Alliance is working with over 400 cattle ranchers across the four countries to help them safeguard their grasslands and has developed the Grasslands Conservation Index (GCI); a statistical tool to evaluate the contribution that a particular farm is having towards the conservation of the regional grassland ecosystem. The GCI grades each cattle ranch on a scale from 0 to 100, where the highest number corresponds to a greater relative contribution that the ranch makes to the conservation of natural grasslands in the region. The index does not only indicate the conservation values, but also the productive capacity of the grassland, in the hope of having a positive impact on the development of the rural economies.

It was endorsed by the Ministries of Agriculture and Environment of six governments within the Southern Cone, with the alliance presenting it to the Inter‐American Development Bank to successfully gain funding to apply the index to 400 farms.

The measurements of the GCI are based on a few simple parameters, avoiding the need for expensive instruments; the aim is to promote its widespread geographical application, with the possibility of repeating the application each year to obtain historical data from monitoring the evolution of the natural grasslands.

The GCI calculates the percentage of natural grassland on the total surface area of the cattle ranch. It then measures the condition of that grassland by analysing factors such as the genetic purity of the grassland in terms of the levels of exotic versus native species.

The GCI also takes into account the scale of impacts from different types of agricultural uses of the land, from afforestation (the most impactful) to grass inter‐seedings used for improving grazing (the least impactful). These values are entered into the formula of the GCI according to the percentage of their use at each ranch.

Lastly, the GCI looks at what is happening in the surrounding countryside; the final measurement will take into account if the ranches’ grasslands are within an Area of Special Ecological Value (ASEV), as declared previously by the government or the conservation community, or if they are part of a zone where grasslands are being replaced actively and extensively.

The ASEVs include the whole range of officially recognised protected natural areas, from National Parks to private nature reserves and other areas prioritised for conservation, such as Important Bird and Biodiversity Areas (IBAs), Areas of Value for Protection (AVPs identified by the Argentine Wildlife Foundation ‐ WWF), and RAMSAR sites.

The GCI result is calculated automatically when data is loaded into the online software. This software allows the user to see the outline of each rural property superimposed on an ordinary satellite image. It allows them to control the original input of information, as well as register annual repetitions, issue reports, and compile statistics which will serve as guidance for State policies.

The next stage is to use the GCI to help the governments develop incentives for cattle ranchers who are shown to be contributing to biodiversity conservation, such as tax reductions or payments for environmental services for those farmers who achieve a high index score.