New wetland habitat has been created for Bitterns in the UK 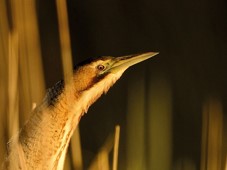 Core breeding sites for Eurasian Bitterns Botaurus stellaris in the UK are situated along the Norfolk and Suffolk coasts, but are at increasing threat from rising sea-levels. Losses of even a small proportion of nests in these core sites would substantially impact national trends. Efforts are now underway to restore existing reed beds and create new habitat at sites less susceptible to sea-water flooding, safeguarding the future of this iconic species in the UK.

Number of calling male Bitterns in the UK under different levels of flood risk from rising sea levels. 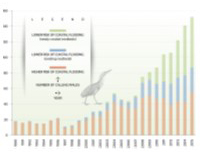 Rising sea levels are recognised as an impending threat to coastal ecosystems (Galbraith et al. 2002, Baker et al. 2006) and estimates predict sea levels to rise by up to 1m by 2100, and by over 5m by 2500 (Jevrejeva et al. 2012). Eurasian Bittern Botaurus stellaris—once extinct in the UK from habitat loss and persecution—is now fighting back, but sea level rises threaten important breeding habitat for this species.

Since the initiation of the Bittern programme by RSPB and Natural England in 1996, numbers have steadily increased. The number of booming males has grown from less than 20 in 1990 to 152 in 2015 (Wotton et al. 2009, M. Ausden unpublished data). Population models show chick survival to be most important in influencing population growth rate, with declines in three core breeding sites influencing nationwide trends (Gilbert et al. 2010). The core breeding sites are therefore of upmost importance, but are located on the Norfolk and Suffolk Coasts, areas vulnerable to saline disruption as sea levels continue to rise.

To ensure the resilience of bittern populations under climate change, reed bed restoration and creation has been vital, with at least 400 ha being restored or created since the first project began. A four tiered approach has been suggested; the first being auditing and restoring reed beds already in existence. Newly created reed beds can take up to 10 years to become suitable breeding habitat, making restoration and auditing use an important approach in the short-term (Wotton et al. 2009).

Ensuring the long-term persistence of bitterns in the UK relies on the ability of shifting the core breeding sites away from at risk coastal areas. The second phase is therefore the creation of new habitat; this habitat will need to be close enough to current breeding sites to ensure effective dispersal, but should have low risk of saline disruption. Out of 152 calling males recorded in 2015, 65 were recorded in newly created habitat (M. Ausden unpublished data), highlighting the benefits of this habitat creation. The third and final stages emphasises the importance of site protection and appropriate management, to ensure a future for bittern in this changing climate.

Recommended Citation:
BirdLife International (2015) New wetland habitat has been created for Bitterns in the UK. Downloaded from http://www.birdlife.org on 29/01/2023