New species continue to be discovered 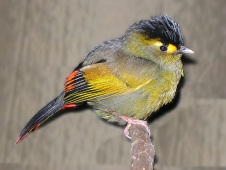 In the first decade of the new millennium 50 new bird species were formally described. Some of these were the result of taxonomic reclassification and the ‘splitting’ of existing taxa; however, nearly two-thirds relate to ‘new discoveries, demonstrating that we are still far from fully cataloguing the wealth of life on earth even within one of the most conspicuous and well-studied groups.

Over the ten year period 2000–2009, 45 bird species were described as new to science and subsequently accepted by BirdLife International, which assesses the extinction risk of all the world’s birds for the IUCN Red List. A further five remain to be reviewed. Some of these new species are the result of taxonomic revisions following the scientific scrutiny of existing taxa—they represent so-called ‘cryptic species’. For example, detailed studies have shown that Madeiran Storm-petrels Oceanodroma castro breeding on the Azores actually belong to two distinct, albeit sympatric, populations with separate breeding seasons, as well as distinctive morphologies, vocalisations and moult cycles (Monteiro and Furness 1998, Bolton et al. 2008). Consequently, a second full species, Monteiro's Storm-petrel O. monteiroi, is now recognised (Bolton et al. 2008). 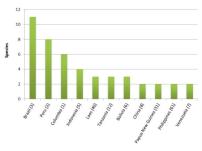 Figures in brackets refer to a country’s ranking for total number of bird species (i.e. Colombia is the most species-rich country in the world with 1,832 bird species).

However, the majority of newly described species are genuinely new discoveries made by field expeditions and intrepid birders. Typically, these discoveries are made in remote and understudied regions of the forested tropics. Unsurprisingly, the four richest countries for avian diversity—Colombia, Peru, Brazil and Indonesia—are also the places that continue to yield the greatest number of new avian finds (see figure a).

Many new discoveries are of inconspicuous or secretive species. For instance, four species of Scytalopus tapaculos were described during the decade—a group of diminutive, typically blackish or brown birds renowned for skulking in thick forest undergrowth (Cuervo et al. 2005, Krabbe et al. 2005, Mauricio 2005, Bornschein et al. 2007). A further eight discoveries involved nocturnal, and consequently easily over looked species, such as Serendib Scops-owl Otus thilohoffmanni, which had gone undetected in the rainforests of west Sri Lanka until a visiting ornithologist encountered its unfamiliar call (Warakagoda and Rasmussen 2004).

Some recent discoveries, however, have involved highly distinctive and unusual taxa. For example, a flamboyantly coloured hummingbird was discovered in 2005 in the Serrania del Pinche Mountains of Colombia (Cortés-Diago et al. 2007). The male Gorgeted Puffleg Eriocnemis isabellae possesses a distinctive iridescent blue-violet and green throat patch, whilst both sexes sport the striking white leg-tufts characteristic of this genus. In Laos, the existence of a strange-looking bulbul, lacking feathers on its face and part of its head, only came to light in 2009 when scientists visited a rugged and inhospitable area of limestone karsts. Named Bare-faced Bulbul Pycnonotus hualon, it is the only known example of a bald songbird in mainland Asia and the first new species of bulbul to be described from the continent in over 100 years (Woxvold et al. 2009).

Often considerable time can elapse between the first sighting of a novel taxa and its ultimate acceptance as a new species. For example, in January 1995 Ramana Athreya, a professional astronomer, glimpsed two highly distinct liocichlas (a kind of Asian babbler) within Eaglenest Wildlife Sanctuary in the far north-east of India. More than a decade would pass before he could trap an individual and take the detailed notes and photographs necessary to make a formal description. The species was finally named Bugun Liocichla Liocichla bugunorum in 2006 (Athreya 2006). In June 2009, researchers at the Danum Valley Conservation Area, Sabah, Malaysia observed an unusual flowerpecker from high on a canopy-walkway. The photographs that they took almost certainly depict a species new to science, however, there have been no subsequent sightings and, until such time as a specimen can be collected, the species will remain unnamed (Edwards et al. 2009). 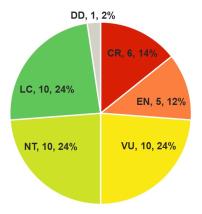 Newly discovered species have often gone undetected for so long because they are confined to very small ranges. This makes them inherently susceptible to extinction. Of those species formally named during 2000 and 2009 and subsequently assessed for the IUCN Red List, 73% are adjudged as either globally threatened or Near Threatened (see figure b). Six, including Gorgeted Puffleg, are regarded as Critically Endangered. The high altitude elfin forest where it lives is under threat from agricultural expansion—especially illegal coca cultivation—and it is calculated that an estimated 500 hectares of potentially suitable habitat are being lost each year. Concerted efforts are required to prevent this hummingbird and other newly discovered species from suffering the fate of the Poo-uli Melamprosops phaeosoma. Only discovered in 1973, this Hawaiian honeycreeper declined rapidly over the following 25 years. By 1998 there were just three individuals remaining and the last known bird died in captivity in November 2004. It is now classified as Critically Endangered (Possibly Extinct).

List of bird species described as new to science over the ten year period 2000-2009.