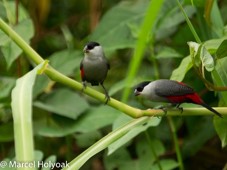 In sub-Saharan Africa, priority locations have been defined for identifying potential new Important Bird and Biodiversity Areas (IBAs) to increase the robustness of the network under climate change. These take account of the value of locations for priority species that are least well-supported in future by existing IBAs, the importance of locations for future range-shifts of species, and the remoteness of locations from existing IBAs. 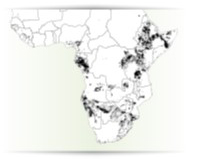 To prepare for this change, new sites will increase the resilience of networks, through allowing movement across landscapes and providing new core habitat for shifted ranges. A modelling approach can enable the distribution of bird species to be determined under future climate change scenarios, and gaps identified depending on their importance for priority species representation.

This approach was utilised using the Sub Saharan African IBA network as a case study (Hole et al. 2011). The network consists of 863 sites, spanned across 42 countries and territories and is home to 875 priority bird species. These species are either globally threatened, have a restricted range, are biome restricted or are congratory species.

Changes in range were modelled to a fine scale, and the proportion of emigrants, colonists and persisters predicted for 2025, 2055 and 2085. An index of added value was created in order to identify new sites that would enable effective dispersal, and that would fill gaps in the current network. The index combined the value of the cell for priority species least represented by the IBA in the future, the importance of the cell for species moving through, and how remote the cell was from the current network.

Although median proportion of predicted emigrants was higher than the proportion of colonists, the overall ratio of the mean number of priority species currently protected by the IBA network, and the ensemble mean of priority species predicted to be protected, is almost exactly the same. This demonstrates the continued value of the current network, even though the addition of sites will ensure the continued robustness for bird species across Africa.

Recommended Citation:
BirdLife International (2015) New sites are being identified to increase the resilience of the IBA network to climate change. Downloaded from http://www.birdlife.org on 29/11/2022