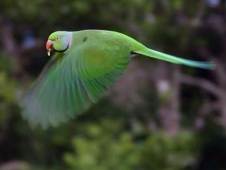 By 1986, the Mauritius Parakeet Psittacula eques had been reduced to fewer than a dozen birds, including just three females, owing to habitat destruction and the impacts of alien invasive species. However, captive breeding and release, control of invasive predators, provision of artificial nest cavities, and brood manipulations increased the wild population to 343 birds by 2007, leading to its downlisting from Critically Endangered to Endangered. This spectacular recovery demonstrates what can be achieved through sustained conservation action informed by in-depth research. 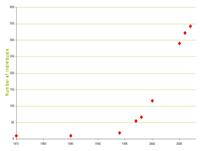 Destruction and degradation of native habitat, introduced species, and exploitation have taken a heavy toll on the avifauna of Mauritius. Since people first settled on the island in the 17th Century, numerous species have gone extinct, including Mauritius Shelduck Alopochen mauritianus, Red Rail Aphanapteryx bonasia, Mauritius Blue Pigeon Alectroenas nitidissima, Broad-billed Parrot Lophopsittacus mauritianus and, most famously, Dodo Raphus cucullatus. In the 1980s, it seemed that a similar fate awaited Mauritius Parakeet Psittacula eques. However, intensive management of the population by conservationists has succeeded in pulling the species back from the brink, reversing the fortunes of a bird once dubbed ‘the rarest parrot on Earth’.

In 1986, less than a dozen Mauritius Parakeets existed in the wild, of which only three were female (Thorsen and Jones 1998). The wholesale replacement of its favoured habitat—upland dwarf forest—with plantations had left the population confined to a tiny remnant of native forest just 50 km2. The loss of mature native trees reduced the production of fruit and deprived the species of suitable nesting sites. The problem is exacerbated by introduced species, such as crab-eating macaque Macaca fascicularis and black rat Rattus rattus that raid nests and compete for fruit. Other non-native species, such as Common Myna Acridotheres tristis and Rose-ringed Parakeet Psittacula krameri, compete for nest sites, with 14–19% of Mauritius Parakeet nesting cavities lost to competitors each breeding season (BirdLife International 2008).

From the 1980s onwards, efforts to save the Mauritius Parakeet were intensified. A highly successful captive breeding project was initiated and wild nests were monitored to reduce the impact of predators and competitors. Reproductive success has been further increased through the careful manipulation of nesting birds. For example, infertile eggs are exchanged with fertile ones and excess chicks are removed from large broods and given to foster parents. Most recently, the Mauritius Wildlife Foundation (MWF) has developed artificial nest cavities, the success of which is such that more birds nest at artificial than at natural nest sites.

In 2007, the wild population had grown to an estimated 343 birds and the species was downlisted from Critically Endangered to Endangered on the IUCN Red List. By 2011 the wild population was counted at 540. The recovery of the Mauritius Parakeet demonstrates what can be achieved through sustained conservation action informed by in-depth research, and it provides encouragement for the conservation of other threatened bird species around the world.

Recommended Citation:
BirdLife International (2015) Nest protection and brood manipulation has helped the Mauritius Parakeet to recover. Downloaded from http://www.birdlife.org on 24/01/2022