Nearly half of Europe's birds have an unfavourable conservation status 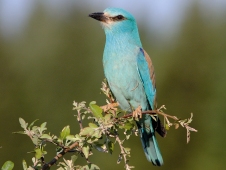 BirdLife’s latest assessment of the conservation status of Europe’s birds at continental level shows that 43% of the continent’s avifauna is in an unfavourable condition – a deterioration from 38% a decade earlier. Species faring particularly badly include farmland birds, waders, raptors and long-distance migrants.

In 2004, BirdLife published its second comprehensive assessment of the conservation status of all wild bird species in Europe (BirdLife International 2004). Like its 1994 predecessor (Tucker and Heath 1994), this review identifies priority species (Species of European Conservation Concern, or SPECs) in order that conservation action can be taken to improve their status.

Of the 524 species assessed, 226—or 43% of the European avifauna—are considered to have an unfavourable conservation status in Europe. This figure exceeds the 38% calculated in the 1994 review, and shows that overall the status of Europe’s birds deteriorated during 1994–2004. However, a few species have recovered and are now classified as having a favourable status. The recovery of Peregrine Falcon Falco peregrinus, is a good example, illustrating the benefits of targeted conservation action. Many of Europe’s globally threatened birds are also faring better, due to the effective implementation of species action plans (SAPs) from 1994 – 2004.

Species faring particularly badly include farmland birds (Donald et al. 2006), waders (Boere et al. 2006) and raptors (Burfield 2008). Many long-distance Afro-Palearctic migrants are also declining (Sanderson et al. 2006), as are some of Europe’s most widespread and familiar species, such as House Sparrow Passer domesticus and Common Starling Sturnus vulgaris. The data gathered for this second review have also led to changes in the global threat status of several species. For example, Red Kite Milvus milvus and Black-tailed Godwit Limosa limosa have both been uplisted from Least Concern to Near Threatened (BirdLife International 2008).

Birds are by far the best monitored component of Europe’s biodiversity, so their deteriorating status is sobering when national governments and the European Union (EU) pledged to halt biodiversity loss by 2010. Despite progress, the 2010 targets were not achieved and new 2020 targets have been set, so it is vital that biodiversity concerns are integrated fully into all sectoral policies that affect the environment. Europe already benefits from some of the finest conservation legislation in the world, such as the EU Birds Directive and the Bern Convention on the Conservation of European Wildlife and Natural Habitats. The need to apply these tools to maximum effect for biodiversity has never been greater.

Recommended Citation:
BirdLife International (2017) Nearly half of Europe's birds have an unfavourable conservation status. Downloaded from http://www.birdlife.org on 08/08/2022

Key message: One in eight of the world's birds faces extinction
Case studies