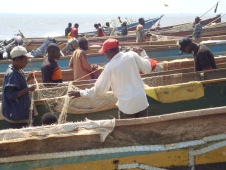 The Musambwa islands IBA in Uganda is home to a transient community of fisherman. Poor resource management, however, had led to serious environmental and social problems. With the help of BirdLife Partner NatureUganda, the fishing community has set up a local organisation, Musambwa Islands Joint Conservation Organisation (MIJCO), which represents them at district level and ensures that some of the taxes they pay are invested in the community. MIJCO has helped to improve incomes, ensure that bye-laws on the collection of gulls eggs and wood are enforced and respected, and contribute to better sanitation that has reduced water-borne diseases by 95%.

The Musambwa Islands Important Bird Area (IBA) in Lake Victoria, Uganda, is used as a base by a fishing community of about 160 people, allowing them to access the deeper waters of the lake. The islands also hold the largest breeding colony of Grey-headed Gull Larus cirrocephalus in Africa.

One of the island’s major environmental and economic problems was the limited availability of wood for smoking fish, to preserve it while awaiting transport to the mainland. There were also problems of unsustainable fishing and harvesting of gull eggs. Traditional practice was to harvest only one egg from a nest containing two or more eggs, but as a result of the transient nature of the island community, coupled with inadequate environmental awareness, these traditional rules and practices had broken down. Sanitation was completely lacking, which meant that the incidence of diarrhoea and other water-borne diseases was very high. The fishermen had no organisation, and so NatureUganda supported them to establish a Local Conservation Group (Musambwa Island Joint Conservation Organisation—MIJCO) and worked with them to solve the linked environmental and socio-economic problems in the area.

In order to address the urgent sanitation problems, an ecological latrine facility was installed. As a result the incidence of water-borne diseases has dropped by around 95%. Friday has been earmarked as general cleaning day, and the uncontrolled use and disposal of polythene bags has been curbed.

NatureUganda investigated the possibility of improving the efficiency of existing smoking kilns. However, this was not found to be very cost-effective, and would only partly address the problem of the very limited availability of wood transported from the mainland. Instead they developed a system whereby the fishermen could pack the fish in ice boxes, using ice supplied by the fish exporters who transport the local fish to the Ugandan capital, Kampala. This has been a huge success, greatly reducing the need for fuelwood and the loss of fish catch through deterioration, and cutting the number of trips to the mainland (a major cost) from five to two per week. Fishermen’s incomes have increased by 18.5%, and now that wood within the island is no longer being cut to fuel the kilns, the vegetation cover on the islands is being maintained at around 82%.

The division of the island into zones, 70% conservation, 10% tourism and 20% “green sensitive” residential, has greatly helped in maintaining vegetation cover. Bye-laws on egg harvesting and disturbance of the breeding bird colonies have been agreed, and are generally observed. The number of gulls breeding on the island increased from about 33,000 when the project started, to nearly 100,000 by its end. The gulls, previously confined to the smaller of the islands, have returned to the main inhabited island. The zero-tolerance bye-law on egg collection has successfully contributed to this result.

The concept was scaled up to include the mainland breeding colony of the Pink-backed Pelican Pelecanus rufescens. MIJCO members introduced the community at the pelican colony to sustainable conservation. Here, only pelicans that have fallen from the nest are allowed to be eaten. A fine of 50,000 shillings is levied from offenders.

What is more, MIJCO has been empowered to sit on a “transparency committee” looking at how local taxes and other funds are used by local government. Community members had complained that although they paid their taxes, local government was not providing any services in return. On behalf of the community, MIJCO met local government officers, who agreed that they could hold back the tax percentage that was supposed to come back to the community. Not only has this ensured that taxes collected locally do actually provide local benefits, but it also allows the local community much more control, and a greater voice in decisions on how taxes are spent. The money is used for such activities as maintaining the community boat, repairing the latrines, and managing the island’s habitat. MIJCO has been registered with the Rakai District local government community development department, which has provided members with identification cards to help in implementation of the Musambwa Islands bye-laws and other national biodiversity laws. A committee member of MIJCO has been formally accepted on the district tourism committee, to guide tourism development. While many environmental and economic issues at Musambwa remain to be resolved, the empowerment of a local organisation has provided an institutional basis for sustained, locally-driven and locally relevant processes to continue in the long-term.